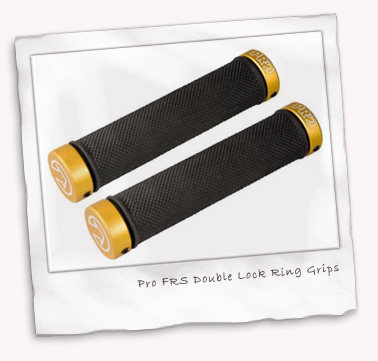 Lock on grips are one of those “doh why didn’t I think of that” products. They are now so ubiquitous that people who have recently taken up MTBing probably don’t realise that we have suffered years of potentially lethal slipping grips before the arrival of lock-on grips.

Lock on grips basically use a hard plastic core, covered in a softer rubber grip and clamped onto the bar via the core to stop the grip moving. Genius, it couldn’t be simpler!

After rotating the grips on my Trek 2 or 3 times to get the most wear (I must be riding plenty!) it came to the point were it was obvious that they needed replacing.

A quick search of the web found a rather natty pair of black Pro grips with matching gold hardware to compliment the rest of my Trek. A couple of days later and the the grips were fitted.

They had many good points. They were super long, thin and soft, covered in small dimples. Just the way that I like my grips.

Fitting them was slightly different to the ODI grips that I’ve used before. Instead of having a split alloy ring that holds the grip in place when pinched up, the Pro used two grub screws that tightened onto a small plates which in turn compressed the hard plastic core onto the bar. The bar end covers are incorporated into the outside clamps.

It certainly wasn’t as elegant a solution as the original ODI method and was much harder to get the grip tight. I guess that ODI hold the patent and Pro (part of Shimano) used an alternative clamping method to get around the patent.

You can probably imagine my disappointment when I lost one of the bar end clamps on the first ride out, leaving the jagged plastic of the grip sticking out and a potential safety hazard. I put this down to the poor clamp.

So unfortunately this is a negative review. The Pro has many good features but the clamping method just lets them down and I can’t recommend them. The grips have been replaced by cheaper (although shorter and not quite as comfy in feel) Superstar grips which use the original clamp arrangement.

It looks like ODI got it right first time, don’t mess with the design.

Filed under Accessories, Reviews in September 2010