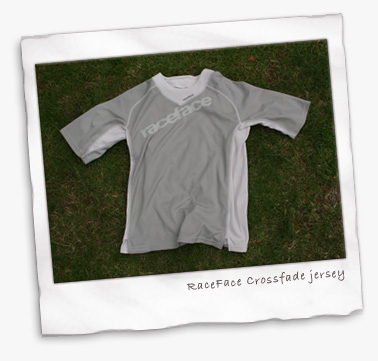 Reviews of cycle clothing are few and far between, not counting some bike retailers and ‘magazine’ sites that have reader submitted summaries, usually of the ‘UR Bik is SARACIN’ variety.

In short, not particularly informative. Bike clothing is subject to at least as many fashion whims as any other clothing type. OK, so we don’t worry about whether this season’s baggy look is long or short or if glitter metallic is in or not. But by the time someone has got round to writing a review of a product the fashion has moved on or stock has sold out.

That’s probably going to be the case here but I’m going to attempt a short review anyway. Since May, in between the apocalyptic floods we’ve had, I’ve been trying out the Raceface Crossfade jersey whenever it’s been warm enough. It was a birthday present from my children, via my wife, via Chain Reaction Cycles and came in olive green (well, more of a sage green really).

It’s nicely cut with longish short sleeves finishing just above the elbow and has a cream contrast panel around the collar, plus cream contrast stitching which is nice and flat to stop chafing. It’s not as loose as I expected, as you always expect Raceface to make room for body armour, but it’s certainly not tight, with plenty of freedom of movement. Perhaps my manly frame just isn’t manly enough.

The material is what I would call a mid-weight variety for a summer top but it does a good job of wicking any moisture away and keeping you cool on hot days, as well as providing a bit of insulation when the temperature is marginal. With the looser cut and lack of windproofing though, keep a shell to hand to throw on top if the weather is dubious or you’ll freeze.

I’m reasonably happy with it apart from the colour – I don’t know but I just don’t think sage/olive and cream does me too many favours against my glow-in-the-dark complexion, especially teamed with dark baggy shorts. The Crossfade is available in different colours though so I’d say it was worth giving it a try.

I’ve posted a couple of pictures to our Flickr account if you want to see a bit more detail.

Filed under Clothing, Reviews in July 2007