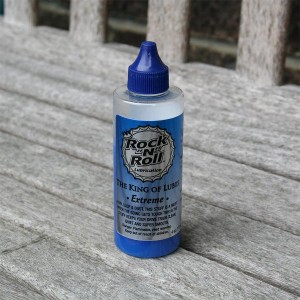 The world of cycling is a strange one. On the one hand you have people investing thousands of pounds in the bike(s) of their choice, agonising over components choices and specs and generally working themselves into a lather. On the other hand, those same bikes can all too often be spoiled for the proverbial hap’worth of tar.

You won’t hear me criticising people’s bike choices round here (apart from those weird handlebars of Dave’s!) but with much of our Surrey Hills riding taking in very wet and muddy conditions there’s an easy way to ensure your bike runs sweeter for longer. Use some decent lube on your bike.

The problem of course always comes down to which lube do you use. For the dust of summer I reckon Squirt does a pretty decent job but as winter deepens it’s time to think of something a bit more robust. This is where Rock ‘n’ Roll lubes’ Extreme chain lube comes in.

I’ve used it for a long time now – getting it from C&N Cycles in Redhill – and it has certainly made a big difference during my month long Never Ending Bike Ride in December. It’s not super-cheap but it’s not super expensive at about £8-9 for a bottle at retail prices.

Basically it’s a petroleum based lube with wax particles in it which cleans the chain and coats it with a nice low-friction surface at the same time. The Extreme version is blue but there’s a lighter Gold grade for dryer months and an Absolute Dry chain lube for road bikes also available. In practice though I’ve found the blue Extreme version is fine on both MTBs and Road bike chains.

To apply you just squirt a generous quantity onto the chain at the cassette, making sure you get it onto each link, then cycle (as in rotate, not ride) the drivetrain a couple of times and wipe off as completely as possible. All the petroleum-ness cleans off the dirt and all the wax-ness gets into the links and lubricates them. You can ride straightaway but it works best if you apply a few hours before.

It’s quite amazing how much dirt comes off even a clean looking chain as you wipe it down. It’s best to apply when temps are above, say, 5°C as the excess wax-ness can congeal on the cogs – no big deal – but once on the chain it seems to last and last. I’ve been really happy with the way the drivetrain has worked and with the quietness from having a nice free running chain rather than a rusty rope of metal grinding over my gears.

So there’s my recommendation. I reckon (from about a year’s experience) this stuff works pretty well and a little goes a long way. It’s certainly a far better option than cheap bike lube and a bit of WD40 to ‘get the moisture off the chain’ after a winter bikewash.

Filed under Accessories, Reviews in January 2012