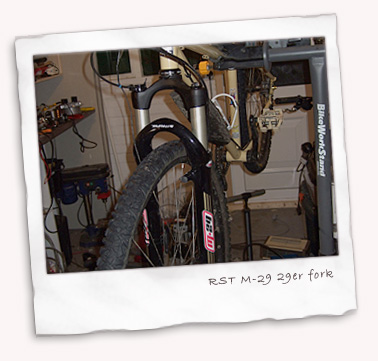 On-One are offering 80mm RST M-29 forks for their 29er frames and I’ve taken the plunge. It was a tough decision as for me it breaks the Zen simplicity of the rigid single speed bike that I’ve been riding for a year or so.

However, I have been riding it more and more and I could ‘feel’ the effects of certain rides more than others once I got home, so I decided that I’d add a bit of weight and a bit of travel to the front to see how I got on.

There’s not many choices for a 29er. Brant does the Rockshox Rebas and CRC do a fair selection of 29er forks but they all represent big money investments. So when Brant announced he was bringing in the RST M-29 forks as a budget option I was interested.

Now lets deal with the RST stigma. I’m sure may of you may have had RST forks in the past. RST 381 seems to ring many peoples bells and I’m one of them. They adorned both my Marin Muirwoods and my Marin East Peak. Given a hot day and the small window of perfect bedding in it was even possible to get 30-40mm of smooth travel from the polymer ‘springs’. In fairness they didn’t require much servicing either but moving to Marzocchi Z2 BAMs was an eye opener to me.

The M-29s are not 381s. They’re not the most polished forks I’ve ever bought either. The paint finish looks cheap, the stickers are…err…sticky and again, not the prettiest I’ve seen but it still represents great value at £175 when you consider it is an air spring, 80mm travel fork with rebound adjustment and a remote compression damping/lockout lever.

Just right for a no-nonsense 29″ singlespeed in fact!

Off came the carbon forks and they floated off into the roof of the garage ;o) (actually they weigh just over 0.9kg according to Brant). The RSTs weigh in at 1.82kg according to RST, so that’s double the weight then!

The original complete bike came with Avid Juicy 3 brakes and the carbon forks are an ISO mount, but the M-29s are a POST mount. After some head scratching and a phone call to Cycleworks I established that I either take off the ISO adaptor and change to a 160mm rotor or I need a 185mm Avid post mount adaptor, which wasn’t in stock. I managed to find one at Head for the Hills for the princely some of £6 so I was off and running again.

Another slight blip came with the realisation that I didn’t have a spare star-fangled washer but Cycleworks had those, so it all fitted together nicely. Nice touches were the brake pipe mount and the remote lock-out.

Odd quirks noted included the fact the the wheel could easily be fitted way off centre in the drop outs. I can’t recall if this is normal or not as my Pikes all use bolt through axles but it seemed a lot of play compared to the carbon forks.

With the bike together the ‘bounce up and down’ test revealed the lockout wasn’t much of a lockout but I gave it the benefit of the doubt until it had a few miles under it. The built-in cable adjuster allowed for easy adjustment of the lock-out position. After a few rain soaked miles things changed though. The lockout worked as I thought it should and the forks had two very different characters depending on how the lever was set.

I think one of the greatest compliments I can give the forks is that I soon forgot about them and just let them work. Doing one of our favourite rooty downhills had me catching the bikes in front with minimum effort and a greatly improved level of comfort. It had nothing whatsoever to do with new, not bedded in brake pads at all, honest!

The forks showed no signs of flex and normal levels of confidence ensued with heightened levels of comfort. All in all they just worked and I think that is an excellent result given the muddy, wet conditions the ride took place in.

As already stated the finish isn’t great and I think the stickers will soon come off, either by themselves or with my help. Apart from that the finish is great. The valve cap and the rebound control are machined aluminium, the lockout is anodised aluminium and there’s no plastic parts in evidence. All in all a smooth, robust fork and excellent value.

There’s some photos of my RST M-29 fork on Flickr too.

Filed under Forks, Reviews in October 2008