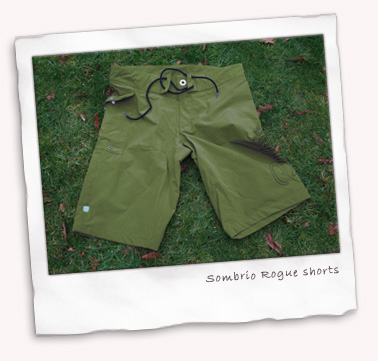 For some time now I’ve been a big convert to the baggy shorts brigade. Although in my less enlightened times I’ve been known to wear lycra—there’s something so sleek about snug fitting sports clothing after all—as time passes you realise that frightening people as you walk into a pub after a ride isn’t all it’s cracked up to be.

So baggies are the way forward and I’ve owned several pairs. The first, a pair of Altura shorts were great but I ripped the crotch out of those. Since then, most times I ride I have my Endura Humvees which have multiple pockets and are hard wearing.

Since the new year though I’ve been seen out in the woods in a natty pair of Sombrio Rogue shorts which were a Christmas gift via my kids from Wiggle. For a start, these shorts are quite different to what I’ve had before. They are made from what Sombrio call a four way stretch material but I call a nylon/lycra mix. It’s much softer than the shorts I’ve been used to and really does seem to stretch in all directions. The colour is also quite striking in a kind of mossy olive green which has definitely made a welcome change from ‘versatile’ grey or black and drawn many comments. I like it a lot. 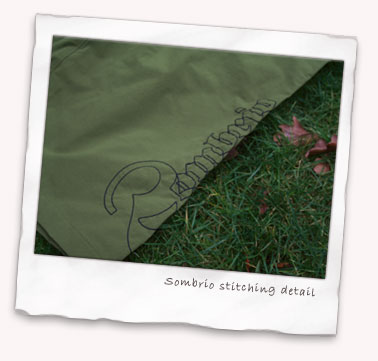 Unlike many baggy shorts, these come without a liner of any sort which for me is a demerit; but then they only cost £24 and you could easily get some padded under shorts. I just use the lycra inner shorts from my Humvees but these are a bit slippery in conjunction with the Sombrio shorts and they tend to slip around a bit.

This is probably partly due to the fastening on the Sombrio as it has a kind or draw cord waist without anything else to snug the fabric into place. It works but these baggies definitely like to slip down on the hips after a bit of riding.

Another point against these shorts is they only have one pocket, which does have a nice rubberised tab on the flap to help open it. Perhaps I’ve been spoiled by the Humvees but only one pocket seems a bit mean; then again, we all have commodious Camelbaks to carry stuff so it’s probably not the issue I see it as.

Overall I’m really pleased with these shorts as they’re cheap and very stylish – apart from the pocket tab there’s a rubberised Sombrio logo and an exaggerated Sombrio script down one leg. The colour works better with other kit than you’d imagine (some Sombrio kit is much more extrovert) and with summer coming I think these will be perfect for the season. As it is, they may be a bit lightweight for winter riding and I’ve tended to only use them on dry trails.

They’re not in the league of the Sugoi’s, Fox’s or even the Endura’s of this world but for the price they make a welcome change. Why not give them, or something similar a go? There’s a few pictures of my Sombrio Rogue shorts on Flickr too.

Filed under Clothing, Reviews in February 2009