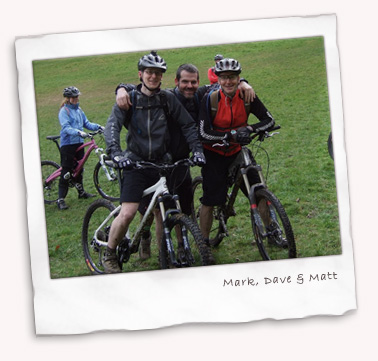 I ended up riding 5 bikes on the Cycleworks demo day, spread over most of the day.

Energy was maintained by a selection of goodies but see the cake review for more details about that.

This report simply gives a few impressions of the two bikes that stuck out in my mind. Other bikes I rode were the Marin Wolf Ridge, Specialized Stumpjumper and Marin Rocky Ridge. All of these were competent bikes and handled the test track with ease.

The Intense 6.6 was the second bike that I tried and although Simon did his best to set it up for me the spring on the coil was not man enough for my particular build! To be honest I didn’t pay a lot of attention to the build up of the bike given that these are frame only but I think it had Fox forks.

Last bike I rode close to this was a Marin Quake and the 6.6 had a much more purposeful feel about it from the off. Regrettably I got baulked a couple of time going down but what surprised me was how I was able to ride it up hill so easily given the travel. I was impressed and I have to concede it wasn’t a totally fair test given the weak spring.

Had that been it it would have been a good day but on a whim (I was riding to give my girlfriend company by this time so was riding what was left over after the serious punters had their choice) I spied an Specialized Enduro leaning up against the wall. Given it’s all air configuration the Cycleworks crew were able to set this one up just right.

I was struck by how nimble and light it felt and it certainly descended well for a bike with 6″ of travel front and back. The really impressive moment for me was powering up the opposite climb and passing so many other riders. It felt like someone was pulling me up the hill it pedalled so well. I was totally impressed and had I not bought a Five last year it would have been a serious contender for a new bike.

It’s a shame the Intense hadn’t had an air shock fitted to give a fairer comparison and I think had I really been in the market for this type of bike I’d have insisted on a test on a better set up one but even in it’s handicapped state it performed well. The Enduro shone though.

Filed under Bikes, Reviews in March 2008