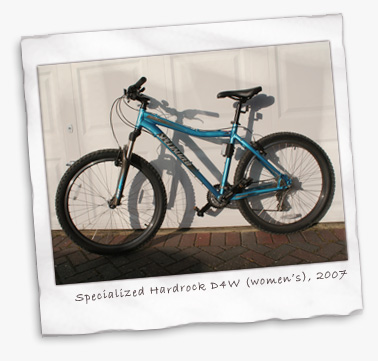 It is a truth universally acknowledged that a grown man, owning too many Mountain Bikes himself, eventually attempts to interest his wife in the sport.

Okay, so that’s a grotesque mangling of the opening of Jane Austen’s most famous story but no doubt she would have some pretty sharp observations to make on the phenomenon which is ‘trying to persuade your wife or partner to try Mountain Biking’.

In my case I can make the case that actually my wife and I were trying to find a means of getting both our children onto child seats so we could take them out locally without the car. In order to do so, my wife needed a bike and it seemed counter productive to saddle her with something second hand and not up to the job.

So, last September we went shopping for a new bike for her. Our requirements were:

We visited Cycleworks several times with these requirements in mind and initially focussed on the Marin Coast Trail, a women’s specific frame that seemed to offer what we wanted, including relatively light weight.

Having tried it though my wife just didn’t feel it was right for her. At 5′ 8″ she really was on the limit size wise for a women’s specific frame and could possibly have tried a men’s frame for comparison.

Instead we took a look at the Specialized Hardrock Sport D4W and immediately liked what we saw. Well, my wife did because for a start the frame came in an attractive metallic electric blue with a large and obvious kink in the top tube that allows very good standover height.

Specialized put a lot of effort into their D4W (Designs for Women) range of bikes. The Hardrock Sport proves the point perfectly as not only does it get a women’s specific frame (with the large top tube kink I mentioned) but a lot of the control components have been made with women’s requirements in mind.

So, for example, the riser bars are slightly narrower than mens bikes to cater for narrower female shoulders, the grips are thinner for smaller hands, there’s a Specialized Body Geometry women’s saddle and so on. I was really, really impressed at the little touches that Specialized had included, in addition to the big change to the frame itself.

Other kit was also well chosen for what is after all a £300 bike. It includes an RST Gila fork with a claimed 100mm of travel and spring rates specific to female loading rather chunky man springs. There’s 8-speed Shimano EasyFire shifting and Acera gears for reliability and a Truvativ Flow crankset. All reasonable stuff for the price of the bike really.

How does it ride?

As this is a women’s specific bike it’s difficult for me to comment but we ended up buying a large frame which appears to suit my wife perfectly and allows me to try it out as well! For me, the top tube is a bit short as you would expect and the forks compress significantly but the ride is comfortable and the bike never feels overweight.

In fact it’s noticeable how well this bike rides, helped in no small part I believe to the quality of the frame itself. There’s all sorts of variation in tube profiles and thicknesses throughout the frame, from a subtly profiled headtube that looks ring reinforced, to large top and down tubes that change shape and profile as they near the bottom bracket. Even the dropouts feature lots of careful detailing and provide disc brake compatibility as a bonus.

Out on the trails there’s plenty of zip that encourages you to chuck the bike around. My wife has rarely ridden off-road in the past but now goes out with her friends and enjoys herself, which is a good sign – it means she feels confident on the bike and in control which was what we wanted after all. It shows the value of getting a bike to fit properly in the first place and that there’s no substitute to trying bikes out first.

I would recommend this bike to anyone considering an entry level bike and feel confident in saying that I expect the men’s version to ride equally well. The geometry puts you comfortably in the middle of the bike for stability but as your skills improve the frame will allow significant component upgrades before feeling outclassed.

A good looking bike and great value for money.

More photos of the Hardrock Sport D4W on Flickr.

Filed under Bikes, Reviews in June 2007