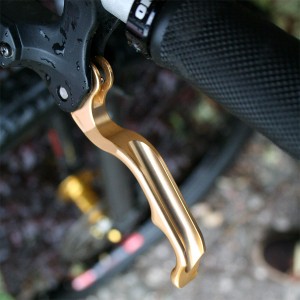 Bikes are very personal things. Despite every child pretty much being able to draw a representative bike with just two circles and a diamond, it’s surprising just how many ways there are to make the bike you ride truly yours.

I happen to think this process of personalisation goes through three stages:

I’ve done all that myself.

That’s great I hear you say, but where do the Straitline brake levers come in then? 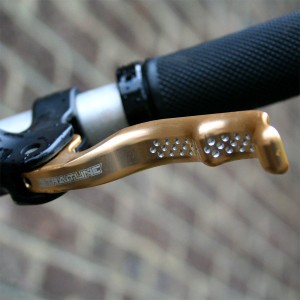 Well, long story short, I’ve just bought a 29er Inbred off DaveC. It’s great, seems to work well for me despite rigid forks and currently, some rather old-school looking Easton riser bars to get the riding position to my liking.

Dave’s plan for this bike was black and gold, in a JPS stylee (that’s John Player Special cigarette branding, as it adorned Lotus F1 cars of the ’70’s, for our younger readers. Not the current faux-Lotus running around F1 tracks of today). This theme meant black frame and wheels with a smattering of gold bits here and there.

When Dave built this up an opportunity arose to buy some Straitline replacement brake levers in gold for his Shimano brakes.

Personally I’ve never got on with older Shimano hydraulic brakes. Too underpowered for me, too vague and more than anything, the lever itself always felt far too thin and flexy to my liking. I’ve always preferred something with a more precise on-off feel to it, which is why Elixirs seem to suit me just fine.

With these thoughts in mind I have to admit to being very surprised when I first started to put miles in on the Straitline brake lever equipped Inbred. Straight away I could tell that the Shimano brakes were quite a step forward over designs I’ve tried in the past, with most of this improvement seeming to be down to the Straitline levers.

The Straitline levers are very solid, being milled out of a chunk of aluminium – and quite a thick chunk of it too. They are anodised in a wide range of colours (I’d personally prefer a different colour to the gold), and laser-etched with three rows of grip enhancing dimples milled into the surface where your fingers come into contact with the lever.

The shape also gives the option of either one finger braking using the farthest end of the lever – which has a pronounced lip at the end to stop fingers sliding off, or you could brake using two fingers since the contact surface features two clear detentes for your fingers. It’s all down to personal preference, with mine being to move the levers slightly inboard and use just one finger if I can.

So the Straitline levers provide a nice size and shape to grip firmly, especially compared to the stock items. What you also get is a step up on performance. With the lever itself being slightly thicker there seems to be far less flex, meaning more of your effort is transferred into the braking system, which in turn means better feel and modulation and greater outright power. Straitline claim less forearm fatigue which makes sense although long brake-dragging descents in the Surrey Hills are few and far between for me to test that out.

All in all, these replacement levers tick the right boxes – better performance, lovely workmanship and the option of several anodised finishes (alas, for my next bike build, lacking only a pale lime green anodised option). This might move me toward the rather sumptious orange instead… but you’ll have to wait and see. And yes I’ve noted they do pastel pink!

The only downside, and the reason for the lower star rating here, is the price, which will easily set you back some £60 for a pair of replacement levers. This is not inconsiderable when you think most people never even think to replace their levers. There are clear benefits from the Straitline levers, and they can be had for less by looking around, but they are certainly at the top end of the market.

But if you want a really personalised ride with upgrades that both improve performance and look great, who cares about all that?

Filed under Components, Reviews in March 2012