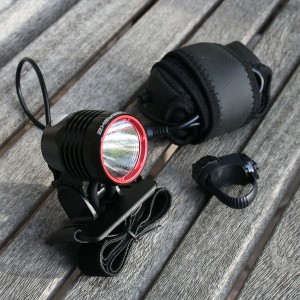 As the nights draw in you have two options from a mountain biking perspective. Either you put the bike away, close the door on the shed and come back again sometime in Spring, or you invest in a decent head light and keep plugging away come rain or shine as many of us do.

Times have moved on from the bad old days of glow-worms in glass jars and these days it’s not difficult to find a light that can easily turn night into day.

If you are just starting out down the night riding road (or trail), you’ll probably be keen to spend less than £100 on mountain bike lights. After all, there’s a remote chance at least you might not like it and £100 sounds like a lot of dough, right?

That means many of the high quality UK manufacturers out there (such as Exposure, Lumicycle or Four4th) will immediately be over your £100 budget, despite offering top-notch warranty backed kit. You really do get what you pay for with bike lights.

At the other end of the scale are a multitude of Chinese imports which come with no warranty, take – potentially – weeks to arrive on the boat and can be of variable quality. We have several riders who have gone this route and it works if you understand what you’re getting.

In between is a company like Uberbike which recently sent me their Uberbike 1200 LED headlight for review. For a reasonable price of £85 you get, as the name suggests, up to 1200 lumens of night-killing output plus the back-up of a UK warranty, a number of different anodised aluminium finishes and some careful attention to presentation and quality control, including a custom logo’d bezel and a UK mains charger. In short, a decently priced value proposition in marketer-speak.

So what comes in the box? Well, first off, it’s quite a nicely presented box! A two layer affair made of stout card which closes with a hidden magnetic snap it opens up to reveal two trays containing the LED head unit, a helmet mount, a handlebar mount, the battery wrapped in a thick padding of neoprene, a connecting lead and the UK mains charger. The battery was pretty well charged when I took it out of the box but just to make sure I stuck it on charge until the red LED on the charger turned green before using the lamp. 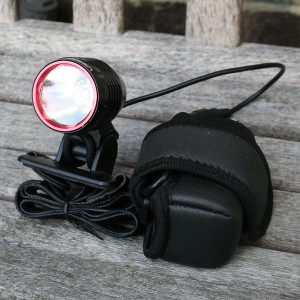 It turned out to be very straightforward to use. The cables snap together with a tight friction connection. You get a short cable out of the head unit, a shortish one from the battery and in between you can add the extension (connecting lead).

It’s possible to run the lamp on the bars with just a short run of cable to the battery strapped under the stem (my favourite for bar lights), or you can add the extension if you prefer the battery on the bike frame somewhere. If you have a Garmin mount on the stem then you’d need to put the battery elsewhere anyway.

To turn the light on you have a large button on the top rear of the head unit which defaults to full power, then toggles to low, followed by a light sensing setting and finally a flash setting before switching off. It was quick and easy to toggle the settings on the trail, even with gloves on but I did find it a bit disconcerting that I had to go through ‘off’ to get back to full power as I tend to run any light on low to save battery burn unless I need full power.

However, in theory this light has up to four hours runtime on full power with the supplied battery and probably more with the light sensing mode, so you don’t really need to fiddle.

The light sensing mode was interesting, obviously I was running in pitch darkness so would expect full power but Uberbike say that depending on ambient light levels the lamp can throttle back to as low as 20% output. This sounds a useful arrangement if you are toying with the idea of 12 or 24 hour racing as it would eke out runtimes further. I’d have liked to try this further to see how this would pan out but unfortunately the light was needed back for reviews elsewhere!

As for the beam, the lamp was very much as you’d expect from a high power LED with a reflecting lens (in this case a Cree XM-L U2 LED). The beam gave a consistent output in a full circle, with a powerful centre ‘hotspot’ where most of the light was focussed and a clear step down from this around the edge. I wouldn’t say this was a bad thing, after all you don’t need to waste light lighting the tree canopy at high intensity and the majority of the focussed light gave a good throw down the trail, with ample fill-in light nearer to the front wheel. 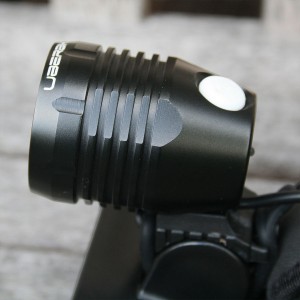 In fact, I think this arrangement is particularly suited to handlebar mounting, giving a good balance of powerful illumination. I did also put some decent miles in with the light on my crash helmet which involved swapping mounts on the head unit using a screwdriver. It’s simple enough to do but not something I’d enjoy doing repeatedly I have to say.

With the lamp helmet mounted my thoughts were once again that the wide (22°) lens gave a real flood of light from the higher mounting point with the centre spot just what you need for picking out lines over technical terrain. The light was so bright that at times there was a lot of reflection from the misty rain-wet, humid atmosphere once away from the trees but that’s a problem of any powerful helmet light.

If I’m honest I felt the lamp was a little large and heavy for helmet use, a result of using that large reflector but I did manage to mount the helmet pretty low down on the front of the helmet like a miner’s lamp and could still adjust it to light the trail and not the floor. It’s not hugely heavy but is a touch more than I’m used to with the combination of head unit and mount, although I’m sure you would soon adapt to that quickly.

I didn’t get to test the runtime of the battery (being out for 2.5 hours maximum) but see no reason to doubt Uberbike’s claims.

Overall I think this is a solid light to get people out night riding. The strobe option gives you the flexibility to use the light for commuting (but please point it down on the road if you can!), while the powerful beam is well suited to off-roading. I like that the battery is well padded and protected, hopefully saving it and your frame or backpack from unnecessary damage while the head unit is smart and attractive and easy to switch between modes on the trail.

It’s possible to get smaller lights, more powerful lights, more flexible lights and even lighter lights(!), all features which I think are worth paying for. But throw in the fact you can get fast delivery from a UK-based retailer, together with a fine combination of price, quality, light output and back-up and I’d say these are a solid choice for those on a tighter budget or who are just getting into the night riding game.

Filed under Lights, Reviews in October 2012