I’m sure a good few people reading this will at some point have complained about a creaky press fit bottom bracket.

Creaky like when some hard cranking makes the bike sound like it’s got a loose floorboard somewhere. Or you can’t chat on the climb because you can’t hear over what sounds like the frame falling apart. Claims of stiffness, lighter frames and other more nebulous benefits don’t hold much water when the bottom bracket doesn’t do its basic job of making the cranks go round with as little fuss (and noise) as possible.

Over the last couple of years, with the aim of making the BB92 on Gilly’s Pivot interface happily with standard Shimano BBs, we’ve tried installing them with varying degrees of: nothing; grease; Loctite; prayer and swearing.

All of which have given up and creaked well before the lifespan of the BB was over (the Loctite got closest but made removal a bit harder than I’d like).

Lately though a number of component manufacturers have been touting adding threads back into the equation to ‘sort’ the press fit problem. The theory being that the two halves of the bottom bracket thread into each other so they behave as a single unit and can’t move. I think Hope may have claim to being the first to market but now there are a few different options.

After a bit of research I settled on the Wheels Manufacturing instead of the Hope because:

Now, that still adds up to around seventy five whole pounds to get a bottom bracket installed. Which makes me wince.

However (and bear with me here) this is hopefully a one off cost as the bearings themselves can be knocked out and replaced for about the same as a normal Shimano BB. On top of that the thread-together design should keep the bearings well aligned and therefore prolong life. Only a lot more time will tell.

And, of course, it shouldn’t creak! So, ordered thanks to John at Bike Plus, it duly turned up.

First impressions were of a very nicely machined bit of kit with a massive amount of thread, presumably to keep everything solid. Installation was pretty straightforward and went something like this – clean everything; apply a little bit of grease to BB and frame; press in one side of BB; thread the other side in by hand; then crank it up. The first cup slipped slightly under torque but a tweak with the tool to that side sorted that. Fit the rather neat rubber seals and the cranks and that’s it.

And that has, in fact, been it! It’s been nearly three months and the bottom bracket is still trouble free, blessedly silent and getting on with going round. If you’ve had problems with press fit creaking I would suggest having a look. For a longer term review, ask again in a year!

A note on the tool – it’s the Park Tool BBT29 and it’s basically a bigger version of a normal bottom bracket spanner. If you have a BB30 bottom bracket and you want to step down to a 24mm crank, you’re in luck as you can use a normal tool.

A second note – check your bottom bracket shell – my Commencal won’t take one of these because the swingarm takes up some of the space in the shell, leaving no room.

Well, it’s been 9 months or so. Has this fairly expensive bit of aluminium tubing and thread lived up to its promise?

The answer, pretty much, is yes.

First- bearing life. I’ve just replaced the second bearing after it filled up with water and seized. The first I changed in August- my fault I think, given how hard it was to undo the crank preload I may have overtightened it reassembling them in a hurry. 9 months isn’t bad for a bottom bracket bearing in my experience and I think it was a very wet day at Coed Y Brenin that finished the second one off. Replacement is pretty much the same as a normal press fit BB, except you leave the cup in the frame and just knock out and replace the bearings, a ten minute job. A pair is ten pounds, so a wee bit cheaper than a normal BB, although it’ll take a while to pay back the initial outlay.

Second- creaking. The last nine months have been wonderfully creak free. I nipped up the BB shell a couple of degrees at the first bearing change but that’s it.

It’s annoying that you need a relatively expensive solution for a problem that shouldn’t exist, but if you have a press fit BB frame that just won’t lose the dreaded creak, I can recommend the Wheels Manufacturing threaded press fit bottom bracket!

Filed under Components, Reviews in April 2016 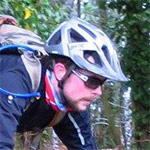