Originally published in November 2003, here’s Matt’s review of the first Whyte 46. Thomas subsequently went on to own one for a couple of years until he broke the forks and decided his riding style needed something a bit more robust.

Jon Whyte is a name familiar to just about everybody in the MTB world as the man responsible for the phenomenal performance of Marin bikes since the mid ’90s. The oft quoted mantra of ‘ex-Formula 1 engineer with Benetton’, coupled with the reputation for reliable and efficient products at Marin ensured that when Jon started up his own brand of bikes, people took notice.

Actually, you couldn’t help but take notice because, let’s face it, Jon’s original single pivot PRST-1 wasn’t just quirky, it was downright ugly. Matters have never really improved since, with each successive design managing successfully to turn its back on looks in the quest for engineering efficiency. Regardless of such noble intentions however, its a competitive marketplace out there and it seems that commerical conservatism has finally caught up with Whyte bikes. The demands of a bike buying public that have never really warmed to the oddball Whyte brand in the past and the need to offer greater than 4″ of front travel means the new Whyte 46 heralds the first significantly ‘new’ frameset approach since the launch of the original PRST-1.

If the Whyte 46 looks familiar to you we’re not surprised. Over the past few years the flying V layout has been seen on Marin full sus designs and has proved to be both lightweight and torsionally strong, at the same time allowing the rear shock to be partially shielded by the seatpost from the worst of winter mud. The Whyte takes the design one step onwards, with smoothly shaped top and down tube swoops in place of the Marin kink. The monocoque construction has been carefully profiled to remove as much weight as possible, contributing to the low overall weight of the bike (Whyte quotes 27.8lbs). 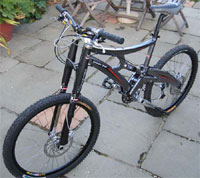 Other revisions to the design include the repositioned pivots to allow for the adjustable travel suspension and small changes to the geometry over the original Marin/Whyte QUAD set up.

One thing worth noting here is the riding position which has a distinct Freeride-lite feel to it (I think that’s the term these days). If you look at the picture at the top of the page you can see how high the front end is and the relatively slack head angle, presumably to accommodate the huge amount of front travel available.

The bike is finished is an attractive, laquered gun metal grey paint which shows off the subtle profiling very well, far better than can be seen in the photographs here. It seems that Jon Whyte has heeded the complaints from earlier owners that the paint he uses is too thin and given the Whyte 46 a decent paint job to warrant its price. Discrete graphics complete the picture.

The overall effect of the design, paintjob and graphics is to quietly shout quality – most people who saw the bike on our demo day were immediately drawn to it, to ask about it, try it, feel its weight and so on.

Any bike is only really as good as its bits. Sounds obvious really but its surprisingly true, especially in this case.

With a bike this price, you’d expect the components to be top notch and they are, most obviously the Maverick fork which at £800 a throw is bound to get top billing. It suits the ethos of the bike well, both are lightweight but designed to provide significant travel. We were a bit concerned that when we picked up the test bike the forks appeared to be slightly out of true (looking down from the top) but no-one noticed this when riding. 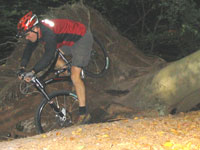 They performed faultlessly left set in their 6″ setting and not one of us had a problem with that sort of travel (except Thomas who launched it heavily over the tree on Wave of Mutilation and dug the nose in on landing!) To be fair, Thomas was probably the only one to give the bike a proper work out anyway.

The rest of the bike is up to scratch on the component front as well, reading like a dream bike checklist – Continental Vert Pro tyres, 717 wheels, massive Hope brakes, Goodridge hoses, 2003 spec XT/XTR groupset, Fox Pro Pedal shock and so on.

As you’d expect, none of it gave any trouble at all.

We took the Whyte for a blast round Surrey’s finest, through Summer Lightning, off big drop offs, down the Wave of Mutilation, Foot and Mouth, White Jam and ending up with a climb to Leith Tower and a play around the bomb holes.

That’s a reasonable work out for one morning but the bike simply took it all in its’ stride.

Anyone who has spent time on a Marin QUAD will know just how good the rear suspension design is in producing an exceptionally smooth but beautifully balanced ride. These features and the tremendous climbing ability that comes with it have transferred to the Whyte 46 in such a way that you tend to take it for granted. Let’s remind ourselves here, this bike has six inches of travel front and rear!

With that kind of travel available it would be reasonable to expect the Whyte to be compromised in some way but the QUAD tricksyness and hyper plush front end, coupled to the stupidly light weight meant that the bike felt as though it was just cruising, which for most of the time it probably was. It’s a bike that doesn’t need a great deal of adjusting to, it just lets you go further, faster, harder, whatever you want really.

That’s a great compliment to the bike when you consider previous Whyte offerings which have asked the rider to put up with a front end which dives at the merest hint of braking and attracts sarcastic comments and weird looks where ever you go. Sure, to really get the best out of the bike you would probably need to spend some time fettling the settings but that’s true of any thoroughbred. The point is that for most riders, there’s no need.

Whyte seem to be quietly trying to move into new territory here without upsetting their hardcore (and hard won) band of loyal owners.

It still retains enough engineering pluses to satisfy the purists, with its QUAD suspension and admirable frame finish. But the Whyte 46 is a different approach, in many ways more mainstream, aimed squarely at the all day rider who wants to lark around when he feels like it. In short, it feels as though its been gently moistened with the Freeride sponge without going to extremes.

Overall, based on a single day, a thumbs up.

Filed under Bikes, Reviews in January 2006