Keswick in the Lake District has been a holiday spot for me for the last three years, but I have generally failed to do any ‘proper’ riding while there. This year I was determined to do some ‘proper riding’ given the close proximity of the Winlatter trail centre. 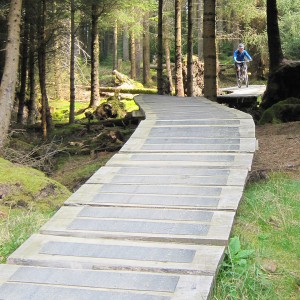 I’ve passed through a few times in the past, the first was before the trail centre was built and the second time I passed though on the coast to coast. Given the logistics of getting two kids and a bike up to the Lakes and the recent theft of my fellow riders bikes we decided to hire bikes up there.

Keswick is full of outdoor shops, hire shops and there was no shortage of options; ranging from GT bikes at £15 per day to Trek Ex5’s at £40 per day. Based on the trail centres advise of hard tails only; we settled on Cube Acid hard tails hired from Cyclewise at the trail centre for £22.50 for the day.

A couple of days’ notice was all that was required to ensure bikes in our sizes, and we picked the bikes up shortly after 10am. Having come from suitably higher spec bikes it took a bit of tweaking to get the bike to handle roughly like I prefer. But there was no getting away from the long stem, narrow bars and small discs.

The advised route was “The Quercus Trail” (blue) then into the south loop of “the Altura Trail” (red) and then the North loop of the Altura Trail (Red). Initially I was sceptical about the blue trail, but given I was on an unknown bike and Eddy is a novice mountain biker we decided it made sense; and what a great little trail it turned out to be.

The sun had been shining all week and as the temperature continued to climb we flew round the berms and occasional small jumps that made up the Quercus trail. The trail was wide and smooth and the middle section (the wonderwalls) was fun and fast. We dispatched the 7.5km trail pretty quickly and I found myself wishing it was longer. 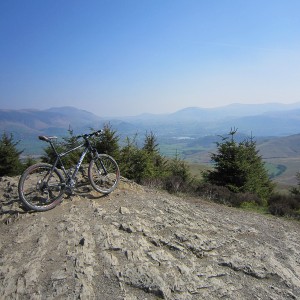 Taking a shortcut at the end of the blue trail we cut into the red trail and climbed on the narrower looser surfaces to the top of the hill. Here the trail split but we decided to follow the extra trail and climbed to the peak at 500m. The exposed area and the blazing sun made for hot going, but after a brief pause for photos at the summit we began our descent to the trail split.

This part of the trail was more technical with exposed rock; gully’s to get stuck in and tricky roots. Eddy’s lack of experience meant he had to walk a few sections and I really began to wish for my own bike.

We regrouped at the end of this section and we both began to feel the pain of the terrible pedals fitted to the bikes. Even my 5.10’s slipped off and the raised metal cage pressed through the shoes causing discomfort towards the end of the ride.

Fortunately the next section of trail was faster with nice berms, good jumps and flowed nicely. The final section took us through the cooler forest, over boardwalks and back to the trail centre. 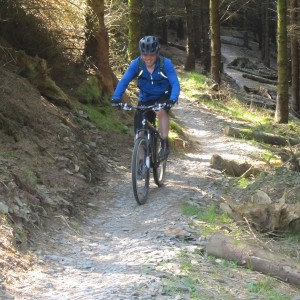 A spot of lunch was called for and we got chatting with a large family who turned out to be with some of the other riders we had met on the trails. There were a lot of nice bikes passing the café and although there was nothing technically wrong with the hire bikes we both said how much we missed our own bikes.

At this point I will say that the bikes were well maintained and the gears shifted well, tyres (Smart Sams) had plenty of tread etc. but Rockshox darts can’t compete with Fox 36 talas forks

After lunch we realised we probably didn’t have enough time to complete the North loop and get back for the family commitments so we opted for another blast around the Blue trail. With more of an idea of what was coming up we were even quicker around and once again I wished it was longer. 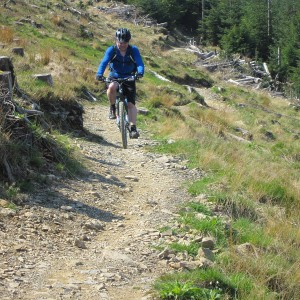 All in all not a bad half day of riding and next year I’ll be going back with my own bike to finish the entire trail and hopefully get some more riding in.