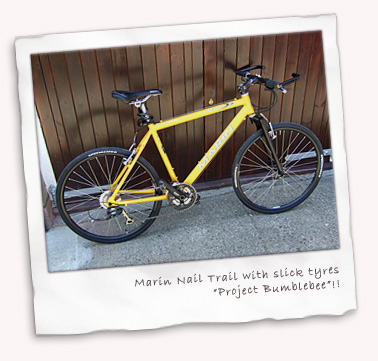 So I wanted another bike. One to use on the Tarmac.

So using Mark’s old Nail Trail frame as a starting point I set about begging for bits. Wheels from Colin’s Inbred, brakes from only Tony knows what, On One rigid fork from Jez and a can of Smoothrite from B&Q.

Since the photo I’ve added a new seat pin and clamp so the seat no longer retracts of its own accord. Also put the original Marin 130mm stem back on but lost the bright blue look with the help of the Smoothrite.

It rides rather well and I’m sure it would be a capable off road machine but I think I’d want a cable front disc at least. Aim to put a 48t ring on it as I spend a lot of time in top on the two rides I’ve been out on with Jem.

Filed under Bikes in June 2009