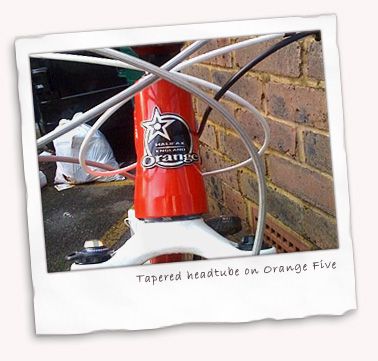 Do you notice anything different about this Orange Five head tube? Yes, that’s right, it’s tapered to accommodate the increasing number of forks with tapered steerers. But that’s not the only thing that makes this Orange Five just a little… strange.

Dave from Cycleworks is someone who is always looking for the next best thing. Having years of bike industry experience behind him, including racing, retailing and mechanics means he’s got a good idea of what he’d like to see on a bike. Or at least, stuff he’d like to try out on a bike.

With some key trends coming through for the kind of market that Fives have traditionally been aimed at — All Mountain, for want of a better phrase — he decided to pick up the phone to Orange and see if he could persuade them to consider some of his ideas. It helps that Cycleworks sell a goodly number of Fives I guess, but luckily for him Orange were quite open to some Five experimentation.

So what’s different then? Well, according to Cycleworks’ own Strange Five blog entry the bike Dave’s currently running has a tapered headtube, a longer top tube to allow a shorter stem to be used and ISCG mounts so you can run a chain device or more enticingly, a Hammerschmidt crank. There’s also a 30.9mm seat tube to let him run any of the current crop of seat dropper posts and cable guides to keep things tidy.

All in all some quite worthwhile changes if you’re someone who likes to push the burlier end of the Five’s performance envelope. Obviously this is nothing more than a prototype but it certainly is food for thought and it’s reasonable to assume that some of these mods may show up in next years Orange line-up.

MBR magazine and a few other people have been trying out similarly equipped frames with some excellent feedback so far, so watch this space.

Filed under Mutterings, Trends in March 2010