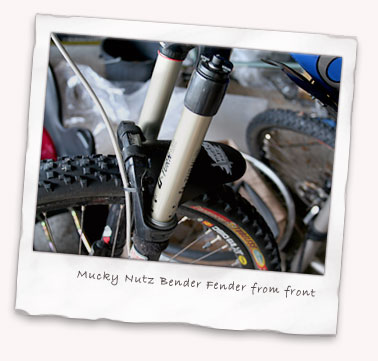 The mountain bike world is one of niches upon niches. But who’d have thought that the mudguard arena could be as competitve and as vibrant as it is now. It’s a polarising place with many riders having strong opinions about the mudguards they favour.

Did I really just write that? Indeed I did.

No mudguard has generated so much attention recently as the Crud Fast Fender, a motocross style guard that fits to the handlebars over and in front of the front wheel. I think it’s an excellent and surprisingly unobtrusive product but many disagree. For those looking for a mudguard that is fundamentally more ‘stealth’, look no further than the Mucky Nutz Bender Fender.

Shane from Mucky Nutz recently contacted me and after an exchange of emails was good enough to send me a Bender Fender for review. I was really curious to see how it worked as rather than try and stop muck coming at you from the front it is designed to catch debris before it gets there. It sits across the fork brace and bends around and over the front wheel, pointing backward. 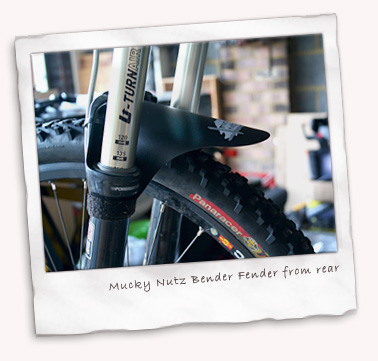 First impressions were a bit confused to be honest. It came with minimal packaging—I suppose you could claim an eco angle there—so sparse that there were no fitting instructions. It consisted of a kind of underpants-silhouette-shaped piece of flexy plastic and a strip of hook and eye fabric with the idea being you cut the fabric to length to suit your bike.

Maybe I’m a bit slow on the uptake but I found the installation to be a bit tricky. I had to go to Mucky Nutz’s website and look at pictures of the Bender Fender to work out how it should fix to the bike but after a bit of fiddling I had the thing successfully on the bike. One thing I immediately noticed is that the nature of the design automatically shielded the fork stanchions from dirt which I thought was a very good start.

The bike I chose to put it on was my Orange Five which is running 150mm Revelation forks. I don’t think there’d be any issue with other forks, it’s really a universal-type product although rigid forks with no cross brace might present a problem. Anyway, Friday was my ride to work day and as ‘luck’ would have it, weather conditions were of the monsoon variety so the Bender Fender was going to get a proper test. I ran it in conjunction with a front Crud guard on the downtube, not knowing initially how it would perform.

In use, I have to say the Bender Fender was a real success. Running in the dark I had a round trip of 29 miles off-road in some of the worst conditions I’ve experienced really for a couple of years. Lots of deep puddles, flood debris and loose dirt meant the Bender Fender was plenty busy. With my Exposure MaXx-D on the handlebars I was able to see the extent to which it managed to cut out the dirt that would normally be thrown up.

In fact, it doesn’t stop everything – I could see a fair amount of stuff and spray still being thrown forward but crucially it stopped most of the clag that normally comes up high enough to get in the face and eyes. I found I could ride without the need for protective glasses thanks to this, quite a benefit when the rain is coming at you in all directions.

At journey’s end I had a look and could see the Bender Fender had earned it’s keep. The Crud on the downtube and the Bender Fender both had a good deal of dirt on them and the fork stanchions were clean so it’s a combination I’ll definitely keep for the winter. By way of comparison I’ll keep the Crud Fast Fender on the singlespeed which if I’m honest probably does a marginally better job.

In summary, the Bender Fender works, no question and has some key advantages – keeping forks clean, minimal weight (just 14g I think I’ve read), a very stealth look and tiny price should keep everyone happy. Quite honestly I’d suggest whatever mudguard you currently run could be usefully augmented with one of these.

Thanks very much to Shane for coming up with the sample for review, I notice Mucky Nutz are now selling both the black version and a new opaque version from their website.

Mucky Nutz are a group of UK-based riders with an engineering background who are taking their first steps in the world of mountain bike component manufacturing and design and have some other interesting offerings, so I wish them all the best. Their bar-end caps and lightweight disc rotors both look worthy of further investigation if you’re looking for some talking points on your bike.

Filed under Accessories, Reviews in November 2009