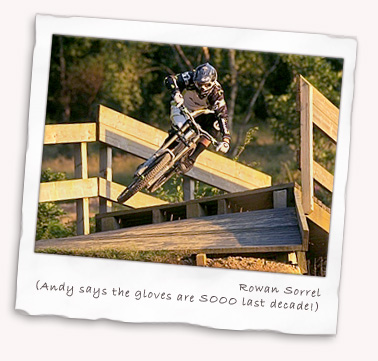 With the excuse that I needed to use up 2 days holiday, carried over from last year or lose them, I found myself booked onto an ‘All Mountain Skills Day’ with Rowan Sorrel (see a profile article in the June 2010 MBR magazine) at Cwmcarn on the first Thursday in May.

On the Friday I had booked myself onto the Downhill ‘uplift’ service (known as ‘CwmDown’). We have had a few articles about MTB skills days on this site recently, so I won’t say too much about it, but we covered a lot of the topics on the Thursday that the ladies from Astounding Adventures covered earlier in the year (weight movement, cornering, lofting the front wheel etc.).

We also spent a bit of time sessioning parts of the DH course, and finished up with some secret singletrack that slalomed through the pine trees on a steep slope which eventually picked up the end of the cross-country ‘Twrch’ trail.

To gain the height on Thursday, we had to climb the 300m to the summit of the course. This time it was a darn sight easier in the back of a minibus, with the bikes loaded onto a purpose built bike trailer.

There was a varied collection of bikes, but my Pace looked distinctly underwhelming (150mm forks, 130mm rear travel) compared to the 200mm travel triple-clamped beasts that most riders were favouring. A couple of guys had more XC-oriented bikes (Lapierre Zesty & Yeti 575), and we three ‘novices’ found ourselves hanging around at the bike as the rest blasted off.

And blast-off they did. They were clearly regulars, and the conversation between them in the bus included questions like, “Are you racing the Nationals this year?” which served to make me feel even more like I was out of my depth. However, I’d paid good money (well, £25 for the day’s uplift; it’s £28.50 on week-ends) and it was time to go.

The left hand side of the course is the ‘black’ route, so I chose the right-hand ‘red’ option. A tabletop and a jump (which were rollable) lead into a couple of berms and the trees. A little pedalling was required (as I clearly wasn’t carrying enough speed) before the next technical section.

Again, there’s a few options to choose from, and they are ‘signed’ for difficulty to help you get down the course. The easier options were all rollable, though there was one corner in particular which I never managed to make without dabbing all day. I recognised some of the course from the previous day’s sessions, but eventually you come to a road and a drop-off of a few feet or more.

On the right hand side there’s a rollable section, but that was on stone and I was not convinced my chain ring would clear it with my weight compressing the rear suspension. This was my excuse to walk it down and continue with the rest of the course. This final section is open and faster, again with some berms and jumps, still all rollable.

Then I was at the bottom, in one piece! I had beaten the minibus down, which was a minor triumph for me, though I was the last to arrive. I’d been overtaken by the lads on the other XC bikes as I’d minced around a section which they cleared first time. It had taken me about 15 minutes or more to make it down, I think the fastest were doing it in about 5!

It was with a little less trepidation that I ascended in the bus a second time, and I felt able to make a few hesitant comments on the course to my neighbours, though I was still feeling pretty self-conscious. We got about 6 runs in during the morning, each ride up taking about 25 minutes or so including unloading time.

As the morning progressed I found myself cleaning most of the lines, and trying out a few minor variations on the route. The driver has a 45 minute lunch break, which gives you a chance to rest the weary arms and legs and take advantage of the fine cafe on site.

I was surprised at how tired I was feeling, the arms suffering due to the ‘death-grip’ I’d had on the brakes as I descended. Not a place to bring the retro, v-braked steed, especially if it’s wet. But today the weather was kind, with the early morning rain clearing shortly before the 10am start, to remain dry all day.

On the last run before lunch, instead of the downhill course I had headed back to the ‘secret singletrack’ that Rowan had showed us the previous day, taking that route back to the centre and the cafe. After my first run down of the afternoon, I decided that on the next ascent rather than heading all the way back down, I would session the tabletop at the beginning of the course.

I had changed my Crank Brothers Mallet pedals to the Shimano flatties for the DH course, and on a few occasions my feet were flying off the pedals as I took a little air rather too enthusiastically. I reckoned that if I could master the tabletop in the flatties I had a better chance of getting it right on a few of the jumps further down the course.

As the rest of the riders disappeared, I sessioned the tabletop 20-30 times, pausing only for a five minute chat with a local rider who had pedalled up to give the DH course a go. With the return of the minibus, I let the experts get away then headed for the tabletop with full-speed (for me), managing to keep my feet in contact with the pedals even though the wheels were off the ground. I wouldn’t claim ‘big air’, but at least it felt like I had cleared it properly.

After a few more runs, it was time for the final run of the day. I think the minibus managed 12 runs in total, which was more than enough for most riders as quite a few gave the last run a miss.

I would recommend it as a cracking day out. You can feel your confidence and lines improve over the day, though I confess I never had the nerve to try the left-hand route and stuck to the right-hand option all the time. But I’m determined to tackle the road drop-off next time I give the DH course a go.

Most of the Moles would enjoy it, I think, as most is rollable and there’s always an alternative to the more technical lines. At the weekend they have two buses running, so the course is a little busier, but there’s plenty of it and if you let the enthusiasts take off there’s plenty of time to enjoy it at a more leisurely pace. Count me in if anyone fancies organising a day trip.

Filed under Reviews, Skills training in May 2010