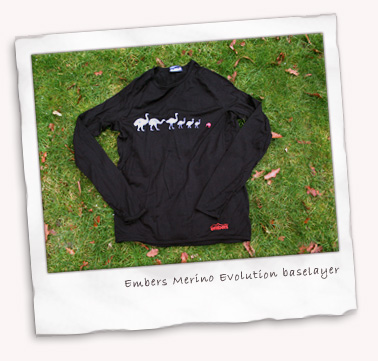 Well, I promised you a review of the Embers Merino baselayer I got for Christmas, so after a couple of months riding, here it it.

I went for the Evolution version which has an amusing antipodean themed image to illustrate Darwin’s theory (strange to think you can come up with an idea that’s so cool people are making nods to it 140-odd years after the event).

Despite the reference to Down Under, Embers are a British brand, based in Derbyshire but specialising in Merino products sourced from New Zealand-based raw material. Not that there’s much raw about it, this baselayer is super soft and also super thin which means it’s the sort of garment you forget you’re wearing.

At first I was a bit sceptical about the Merino thing, it’s pretty well hyped in the industry and when friends who are both runners and snow boarders looked at me like I was mad to get a baselayer costing £44 the doubts set in. But they’re life long Lifa wearers and sometimes you just have to try something different.

Out of the box (err, bag and wrapping paper!) I was a bit worried because the material is seriously thin – you could convince yourself you can see through it. But the attention to detail was pretty good, nice flat locked seems, the graphic I’ve mentioned which is nicely detailed and an Embers embroidered logo in the bottom right corner.

In use, the first thing you notice is how insubstantial it feels. First thoughts are it’s just not warm enough but I’ve been out on several rides since Christmas with just it and my Gore Phantom jacket and found it must work well – I haven’t really felt cold. In the extreme cold I’ve added several other layers though to be on the safe side but this has just highlighted how good it’s wicking properties are as I’ve stayed dry and comfortable even though I’ve ended up overheating with all those extra layers.

I wouldn’t rely on it solely for insulation, it’s more about moving sweat away from your skin, so you tend to lost warmth quickly when standing still on a cake stop if you haven’t anything else to keep the elements at bay, but that would be true of under dressing on any ride.

Amongst the much touted benefits of Merino are the anti-bacterial properties and I’ve not been disappointed here. I’ll confess to wearing this top on three separate rides without washing it, spaced out over a week and a half! (maybe that deserved a gross out warning). It sounds a bit anti social but actually, it really hasn’t needed washing. It doesn’t pong and feels fresh and clean when I put it on so it could be the ideal baselayer for tramps the world over. 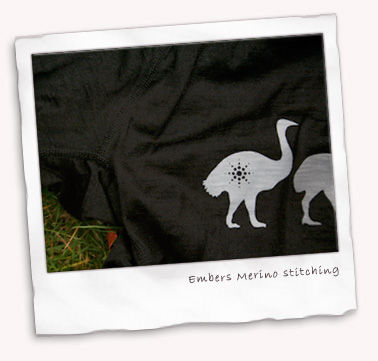 Overall then, it’s not been a bad purchase at all, especially when you think a Howies merino baselayer is £55 although it may be a bit thicker. The Embers version is 185g/m2 but I don’t know how that compares to the Howies. Cut-wise, the medium size I have fits my strikingly manly torso well but I could do with – no I’ll correct that – I’d prefer it if it was a touch longer in the body. I’ll definitely consider another and quite fancy a short sleeve for the summer – it’s claimed to keep you cool when it’s hot too!

If you haven’t tried Merino yet, I’d say go for it. More pictures of the Embers Evolution baselayer are on Flickr.

Filed under Clothing, Reviews in February 2009