In accordance with the First Law of Cycling, which states that if you even think of getting on a mountain bike be prepared to hand over random and unplanned sums of money to the nice man at your local bike shop (LBS), I recently managed to rip the gusset of my favourite (and only) pair of Altura Altitude baggy shorts.

In deference to the First Law, I therefore went out at the weekend and bought myself a new pair of Endura Humvee shorts as replacement from Cycleworks in Leatherhead. 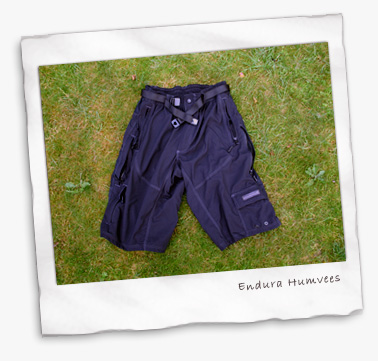 With my limited experience of buying baggy shorts I was somewhat surprised to find that the Medium was far too medium for comfort, even for my slight frame. I can’t imagine that anyone older than twelve could possibly fit into a Small but I’m sure Endura know what they’re doing with their sizes. Anyway, I went for the Large and console myself with the fact that it’s a ‘small’ large.

The short itself comes up high on the waist in a disconcerting Simon Cowell-esque manner although once you are on the bike with a cycling shirt over the top it’s a secret that only you need know. The benefit of course is that it keeps your lower back covered in inclement weather which counts for a lot. Not that it was inclement on one of the warmest and most humid weekends of the year, of which more later.

A big plus for me was the fact that the Humvees have a detachable inner short which gives you the option of removing the outer if it gets muddy and you need to drive back from somewhere or if like me you need to get into the house after a ride without dropping mud onto to your sensibly chosen beige carpet.

Other features of the short include myriad pockets, not as one would logically think for putting myriads into but for storing maps, phones, keys, change and anything else you can think of. These truly are the shorts to wear if you wish to run a discreet people trafficking operation as there’s a pocket for everyone and the bonus of a couple of ventilation zips to let in some air if things get too hot.

And on Sunday, hot things got. As I said, it was a humid day but I found the shorts very hot indeed, at least until I remembered the ventilation zips which did make a difference. The inner short held everything nicely in place and was properly tested coming down Juniper Bottom where in the past with the Alturas I have experienced some unplanned jiggliness in my nethers. (although the Alturas were getting a bit old).

So, thumbs up. The price was right at just under £40, you can hardly go wrong with designer black and there’s a lot of flexibility designed into the shorts. For the brave amongst you and anyone with a suntan they can also be had in a fetching stone colour.

Filed under Clothing, Reviews in July 2006