My LBS, Cycleworks, offered the chance of a ride on the Niner Air 9 Carbon and who could refuse such an offer when the bike in question is a thoroughbred racing machine? Of course the muddy Surrey Hills offered up some difficult conditions which would test rider and machine, especially since this bike was in singlespeed configuration with Air Carbon rigid forks! 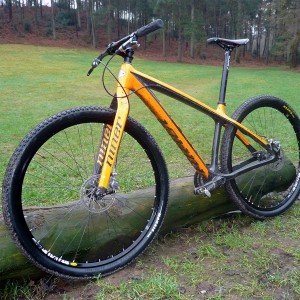 Trying a new bike is always a special event but this one was made more so by a couple of mates (Dave and Jem) riding bikes that would prove to draw out the key differences of the Niner; one was a similarly equipped singlespeed with rigid forks, whilst the other was a geared full sus.

The short XC route to join up with this unlikely mob revealed the first issue and that was sizing. At 5’11’’ I am right on the border of the medium / large sizing in the Niner and the saddle height was at the maximum with the flat bars just marginally lower than the saddle. This put my weight well forward and the effect was noticeable on the arms and wrists even after a few miles. Clearly the rigid forks transmit all the energy through to the bars but this would be a very tiring position over a long XC route. Of course this could be resolved with different stem / bar options but something to be aware of for the day.

Arriving at the rendezvous a quick bike weigh saw the Niner tip the scales at 20.5lbs. Knock a bit of mud off and it is a 20lb bike. Off to Holmbury and we rode a mixture of muddy singletrack, fire roads and arrived at the top of BKB for the first of 3 attempts at this classic trail. The conditions were poor at the top but in a reasonable, dry state over the bottom half. The overriding view I have is of a bike that is very agile with quick steering but very unforgiving in this rigid format.

For pure XC, this bike would be awesome; but on a claggy, rooted technical section it is both amazingly capable but very tiring. So focusing on the amazing aspects rather than the tiring ones; the handling is very responsive and I found for the first time the confidence to really lean on the brakes to help move the bike through and over the obstacles presented.

In contrast to the Orange I ride, you can really feel the effect of weight transfer and once mastered this would really add another dimension to a ride. Clearly the hardtail, rigid fork set up gives you such direct feedback of the trail and the attitude of the bike. These signals are much more pronounced than a full sus 28lb bike.

I loved that feeling and on a dry day would just revel at attacking the trails with this “blade” of a bike, but what surprised me a little was the apparent grip of this 29er with Maxxis Crossmark tyres in the mud. The front was a bit sketchy in parts but the traction was pretty good; could this be a 29er side benefit?

So my overall impression was of a very focused XC bike that was really well set up for the primary purpose; to race! If you want a Sunday hack to take you from one cake stop to the next leave it at home. If you want to go attack the trails; eat the cake first then “Pedal Damn It” as the decal on the top tube says.

After a tea break at Peaslake village stores, it was my turn to have a go on the Niner.  It was set up as a single speed, but can also be traditionaly geared.

My immediate impression, was the accelaration it had. I got into a rhythm on route up the hill to the start of BKB and was surprised how easy it rolled – UP!! It really covers the ground steadily, not sure if that was the lack of weight or the 29er wheels. It was running Maxxis Crossmark 2.1, they weigh in at 605g if tubed, as I believe this set was. So a reasonably light option.

Once I arrived at the top, the boys were nowhere to be seen, now either they were both being very nice and hanging back to make me feel good, or more likely this is a quick bike.  My  run down Barries was good fun, you really sense the size of the wheels rolling easily over  some potentially slippy roots. The rigid forks are quick to respond, but not forgiving on this terrain. Taking in the burms towards the end of the run proved fast, due to the smoother  trail conditions and the lightning respose the package has.

You could run this bike with suspended forks adding maybe 1lb or so, then running geared will add probably nearly 2lb with top flight componentry. So the overall weight of running a geared version is going to be in the order of 23.5lb. An amazingly light XC race machine.

It does get me thinking though. You can buy a full sus carbon Sant Cruz Tallboy (which is 29er) weighing in at 25lb dressed in top kit, although it probably is more expensive.  I  know its not a hardtail, but will be faster on the technical stuff and more comfortable on a long ride.

For me I would probably plump for a lightweight full susser for racing as I believe fatigue would set in earlier on a hardtail, especially if your on the wrong side of 40 and nearer  to 50.

As they say horses for courses. More info from Niner Bikes, or contact Cycleworks if you want to try it out on their upcoming Cycleworks Demo Day on March 13

Filed under Bikes, Reviews in February 2011

Well this MTB phase started more recently for me than most in the Muddymole clan. I had been suffering ankle and shin injuries from years of endurance running and finally decided to give cycling a try. Taking my Trek MTB to Cycleworks for a quick service I realised technology had moved on and that my old bike had passed the best before date.

I walked out a week later with a Specialized Rockhopper and headed off into the Surrey Hills. Most of the time I ran along the North Downs Way, normally struggling with some technical aspect or other more than once on each ride. Realising I was likely to replace ankle and shin injuries with broken bones I sought out help and found, by chance, the Muddymole group. It was with some trepidation that I embarked on my first ride, a night ride, and surprisingly I survived.

As they say the rest is history. I have bought 5 bikes in the last 3 years, not all for myself you understand, as I commute to work and encourage my family to push the pedals too. My pride and joy is the Orange 5 SE which keeps me out of trouble more than I deserve. It is a bike that flatters those with limited skill!