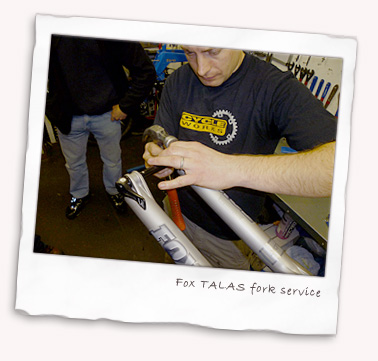 Last Thursday I attended the first of a couple of sessions offered to the Moles by Dave from Cycleworks covering basic fork and shock servicing. Most of us will automatically box up our forks when they start to get really stiff and unresponsive and send off to any one of a number of online fork servicers out there at a cost of £75 plus P+P minimum.

With a little regular servicing, Dave wanted to show us how we can literally save ourselves a fortune. And it turned out to be a lot simpler than you’d expect.

For a small fee to cover Dave’s time we got a two hour in depth demonstration for servicing both a Fox shock and two of the most popular types of fork currently on the market, a Rock Shox Revelation (which is very similar to the SID and Reba designs) and a Fox (in this case a TALAS).

Now, while most of us are quite happy to have a go at most aspects of bike servicing, somehow forks are the sort of things that tend to get overlooked other than a wipe down after a ride as the bike is cleaned. As Dave showed, this really is not enough. The manufacturers for example recommend a minor service at about 25-30 hours of riding and with our legendary UK conditions things can quickly wear out leading to substantial damage.

Not good when decent forks set you back at £4-600 these days.

The lubrication system on the otherhand, which has to cope with keeping the stanchions sliding smoothly up and down the lowers, gets a lot of abuse. It consists of a separate charge of oil in each fork leg which is used to lubricate the seals, bushings and stanchions and as you can imagine has to cope with a lot. Unfortunately, we as mountain bikers just seem to forget all about it.

So Dave’s demonsation was to show how easy it is to actually keep things in tip top condition by changing the oil and cleaning and re-greasing the bits that do all the work. His 2010 Revelation was being stripped for the first time after three months of use but even so it quickly became clear that there was practically no oil in the fork lowers and the seals were very dry. 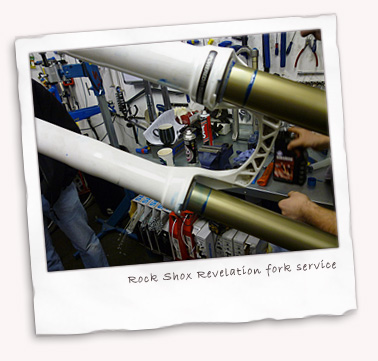 The other fork that was covered was the Fox, which uses the same oil to both lubricate the whole system and perform damping and compression duties. The circuits for this sit in one leg only while the second fork leg has just a small amount of lubricating oil in it, often resulting uneven stanchion wear. In principal the service process is exactly the same but there are some key differences to ensure you’ve cleared all the old oil out prior to refilling.

Incidentally, the amount of oil in the system is critical and is listed on the manufacturer websites for each model. Too little and you’ll get quicker wear, too much and you could be faced with fork suck down as the fork packs down under pressures of up to 300 psi – scary to release!

Dave also covered rear shock servicing using a Fox RP23. As with the Rock Shox forks these use a sealed circuit to keep the damping and compression circuits out of trouble under very high pressure. The rebound is handled by the larger air can which slides up and down the shock shaft. Again, with all the mud and stuff around the seals get a lot of abuse so a simple re-grease and clean will keep things running well indefinitely.

That got me thinking about when I last serviced my Five’s shock. Never was the answers, some 2,500 miles ago. Oh dear! Poor performance and premature shaft wear is the risk. Incidentally, the Fox shocks can be made a touch more progressive in nature by increasingy the amount of lubricating fluid in the shock apparantly.

John made some notes on the Revelation service which I’ve replicated here (thanks John!). For more information I’d say contact Dave at Cycleworks because this really was a very informative session and I came away feeling confident about doing the work myself. With half a dozen of us on the session it was cost effective and a good chance to see what we can do ourselves and what’s best left to the experts.

One final thing. It made me want to get my garage cleared up, properly fitted out and properly lit. These things make a difference!

You can see our fork service photoset on Flickr.

Note: No need to let out air pressure from fork as the damping circuits are completely separate from the lubrication system.