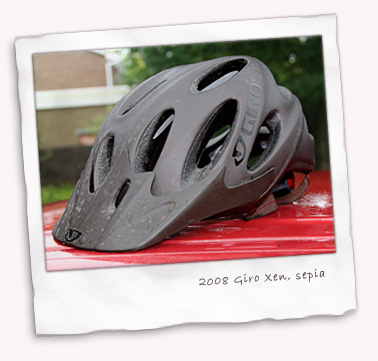 When it was introduced the Giro Xen was one of the first MTB helmets that combined two seemingly disparate styles, the skate park pot style lids with the more traditional, maximum ventilation mountain bike helmet. It’s a difficult trick to pull off as better protection means more weight, but the Giro was an immediate hit and has spawned many imitators.

Giro got round the style and packaging problem by reducing the number of vents (to 17) and increasing their size, which works better at slower speeds and allows them to bring the helmet coverage lower round the back of the head. The weight is still a reasonable 340g, even with the detachable visor.

In a way that information is merely incidental though. For me and probably most others, the criteria for choosing a crash helmet puts three issues at the top of the list – style, comfort and performance. I’d like to say the style is a bit lower down the list but that would just be a vanity too, of a different sort.

Luckily, to my eyes the Xen scores highly for looks. There’s a pretty big range of colours out there, so if you want that white(ish) and lime green combination for next year you’re in luck. I asked Cycleworks to order in the sepia brown version and wasn’t disappointed as it’s got a lovely matte-yet-metallic finish to it, complimented by the X moulding at the back being picked out in a deep red (there’s a few pictures of my Giro Xen on Flickr).

Comfort wise, well I’ve written in the past about how my particular aero head seems to object to certain helmet designs. Originally I hadn’t thought to buy the Giro Xen, which even with a deal you can expect to cost the best part of £80 – not cheap. Added to which, my experience with the cheaper Giro Animas had been disappointing.

After trying on several competitors, including the Specialized Instinct (a close contender, but boring black) and the Fox Flux (which I really expected to like but couldn’t get comfortable with) it was clear the Xen was the first choice. It fitted me perfectly as a medium which is the first prerequisite to it working in extremis and was very comfortable for me, with thick Coolmax pads and the Roc Loc 4 retention system helping to spread the load forces evenly. No more Klingon style grooves in my forehead but spectacular helmet hair instead!

As for performance, well you may have heard I came off the bike heavily last week which involved studying the tread of the front tyre as I went over the bars, landing on my head and shoulder. The Xen was showing some minor scuffage after that but stayed in one piece and more importantly, stayed on my head. Now that £80 investment seems very worthwhile to me.

Aside from that, I’ve found the helmet to be comfortable and pretty cool on the trail, almost at the ‘forget you’re wearing it’ level. Based on my experience I’d recommend it to anyone but try before you buy – your mileage may vary as they say.

Filed under Clothing, Reviews in July 2008