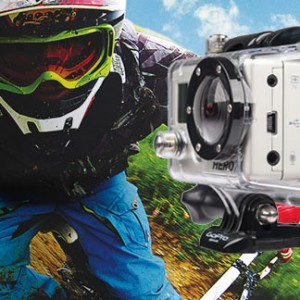 I guess you might call this more of a long term test as I’m referring to the original GoPro HD that I’ve had for a while. Having looked at the spec. of version 2 I can see no reason to update other than the much clearer LCD display. The 720 and 1080 performance is excellent on my original camera and hence I’m sure that version 2 retains that.

So as part of our tips on helmet cameras mini-series here are some of my comments about the GoPro. Read them in conjunction with Steven’s review of the Contour HD video camera to get a comparison.

When I bought the GoPro HD it had 1080 recording that the Contour did not. It also had a very wide angle lens. Having a good knowledge of photography and how lenses work I knew that the wide angle lens would be an excellent choice for using on the bike. It would cut down the effect of shake and movement on the ‘film’ (sensor) and mean I could get away with being less accurate with the camera positioning. I’d also worked my way through about 5 other models in search of a ‘perfect’ result. Luckily the GoPro seems to provide that and I’ve not felt the need to change it.

The benefits of the GoPro are an excellent waterproof housing which has a replaceable optical lens cover for when you scratch it. Various adaptors are available to mount it where you want. This includes a helmet mount but I can’t comment on that as it’s not a position that I find works for me. However, I see lots of them on people helmets so it must be OK.

I like to make full use of the tripod mount. This enables me to make use of any of the huge variety of mounts and clamps available. I can fit it to the frame pointing over the handlebars , on the lower fork leg pointing forward or back, on the seat pin pointing back or virtually anywhere in between. Having a stable part of the bike in shot makes the film seem much more stable and watchable in my opinion. The other popular mount is the chest strap and that’s the mount I’m currently playing with.

The trick with the chest mount is to mount the camera upside down and then tell the camera to film upside down, meaning the footage comes out correct. The reason you have to do this is that the pivot for the camera only allows you to pivot it forward when mount upside down, otherwise you tend to get a great shot of the ground (see below)

Using the camera is extremely straightforward on the trail. I generally have mine preset to film at 720/60fps and then it’s just a case of powering up the camera with the front button, stopping and starting with the top (or bottom if inverted!). For a 2-3 hour ride it can stay in standby all ride.

After the ride I just hook it up to my PC with the USB cable and download the footage, using Adobe Premiere Elements to edit it and then download it to Vimeo. Personally I just like to trim the clips and join them together into a series of events without trying to do anything too fancy. I have tried some picture in picture footage and it’s easy enough to do following the Adobe help file. Upload to Vimeo and wait for it to appear.

Overall I see no reason not to give the GoPro a full recommendation as a bike camera.

Filed under Accessories, Reviews in February 2012