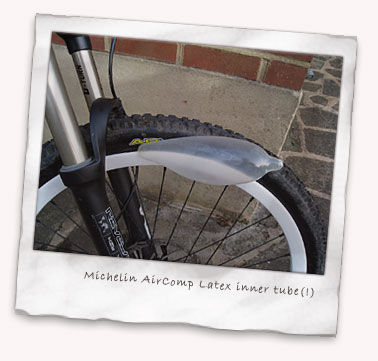 It really sucks doesn’t it when a perfectly flowing and enjoyable ride gets blighted by the dreaded curse of the flat. Although we’ve been reasonably lucky over time, several Moles rides this year have been littered with the things. It also seems odd that once a rider is inflicted on a given ride, the poor sod gets ‘flatted’ at least once more.

The Fourth Way – The Fight Against Punctures Continues

Lee and Tony have both been there recently. Matt also nearly died of hypothermia back in March when he flatted in a freezing hurricane only to find he was alone and out of usable patches.

The alternatives explored so far to my knowledge are (in addition to just lumping it and repairing/replacing tubes):

Running tubeless seems like a great idea and its one of those things that when it works, its so damn good. However, most folks seem to find the conversion process a complete pain in the arse. Proper rims and tyres alleviate that but then there’s also the risk of when things go wrong out on the trail, you need to revert to tubes. Also, you will probably spend the rest of your ride covered in sealant as if you’ve been under the flight path of a flock of seagulls with bad guts!

Personally, I’m not a fan of running tubeless – I just like the comfort of knowing there’s a tube in there, which is probably a very lame argument.

Finally (or so we thought) there are slime filled tubes, as promoted by Tony and DaveC in almost evangelical fashion. I like this idea, particularly the Slime Lite versions, that offer almost no weight penalty. I’ve been running these in one bike with great success, although Tony has had some bad luck of late with them, but then that guy covers some miles!

In view of this, I adopted the spirit of the Moles quest for the ultimate solution and stumbled on The Fourth Way. Steady yourself for a stream of childish double-entrendres!

I never thought I would find myself putting a couple of Durex in my rims (normally its the other way round!) but yes folks, I think I’m onto something here. Michelin AirComp Latex tubes.

Not only do they claim to offer much-improved pinch resistance and anti-puncture properties (the latex gives against pressure from a thorn’s penetration) but they are also LIGHTER than standard tubes. They come in a garish lumo turquoise colour and there aren’t flavoured or ribbed versions!

I’ve been running them for a while now and haven’t been let down (tee hee) yet. They most certainly do resist thorns as a quick inspection found two of them in the tyre but the latex had held firm (fnar fnar). I like to run tyres quite soft and haven’t yet had a pinch flat either.

Unlike the contraceptives the only drawback (for those who aren’t one of life’s tinkerers like me) is that they do seep a little (air I mean) so they’ll need a top up every 1-2 weeks. Hardly a hardship… Can’t help wondering why the latex seeps air but not other substances, though in my case, with 3.9 kids (4th due in a few weeks) perhaps that offers some explanation as to my recklessly large brood!

Something else to try if the frustration gets too much for you!

Filed under Components, Reviews in May 2009