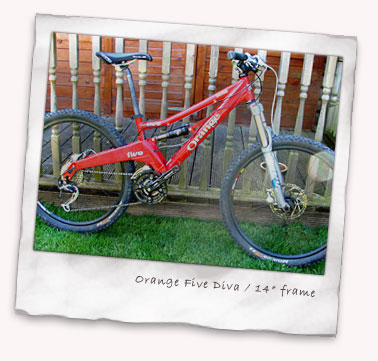 Mrs Tony (Debs) has been looking for a new bike and top of the list was an Orange Five Diva. Finding one of these is like like finding hens teeth but Cycleworks in Leatherhead pulled some strings and were eventually able to get one from Orange. Even then it was not quite what we expected.

First impressions on the Five Diva are strong. My god it’s small. It looks more like a one of Danny MacAskill’s trials bike than a fully formed 5 inch full travel suspension bike. It has the smallest stand over I’ve ever seen.

Plus this one wasn’t pink but red. This is because the Diva comes in two sizes, long and short – as in top tube length – and this particular model, the long size, is the same size as a standard 14inch Orange Five. Hence I think that this was a dual function Diva/14 inch Five demo model.

A quick change of cleats and saddle, fettle with air shock pressures and extension of the seat post to max, Debs position was spot on and she was off. Immediately a couple of things were evident. This was perhaps the noisest bike I’d heard for ages! Not only was the Hope hub doing it’s full on impression of a 1970’s football rattle (which is a love/hate thing and Debs definitely hated) but the whole thing creaked to hell.

We tightened what we could and checked everything was greased but it wasn’t until I spoke to some of the other Five owning Moles that they told me of the non-obvious cure. Do up the rear wheel quick release. Stange as it might seem this was the answer.

So sorted out, off went Debs for a bunch of test rides (leaving me child minding rather than riding!). Overall impressions were good but slightly underwhelmed. It climbed OK and descended very well but was it £2449.95 good? Not really.

It left me wondering why the Diva hadn’t impressed Debs or other Molettes that have tried it. Maybe they don’t ride them hard enough to get the most out of it? – although if you have ever seen Debs descending you’ll know that she doesn’t mess around.

Next, looking a bit closer at the Diva demo a couple of things struck me. Given that this bike was aimed at ladies of 5’5″ and under, was this really a place for a full almost 700mm wide riser? I don’t think so. However for me the biggest issue was putting 175mm cranks on a bike for the smaller lady. I think that this would give a very different ride feel for Debbie and the other Molettes compared to their other bikes and I’m not surprised that they didn’t quite get on with it.

Basically I’m not particular impressed with Orange about the spec of this demo bike. If it was one of us guys and a demo bike came with 180mm cranks and a +800mm wide bar we wouldn’t be impressed would we?

So Orange you aren’t doing yourselves any favours here and the strong likelihood of a purchase has gone. As much as Debs would like to buy British (I’m a big fan and Orange owner too) it’s a Trek Fuel EX 8 WSD or a Specialized Safire next on test. With female specific slim grips, shorter cranks and narrower bars more thought seems to have gone into these bikes.

Filed under Bikes, Reviews in June 2009