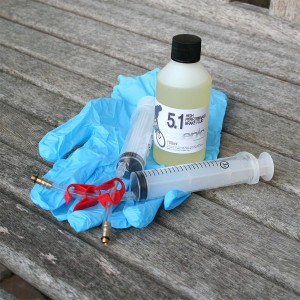 One of the best features of hydraulic disc brakes is that they are basically pretty low maintenance. I’ve had some disc brakes that have never needed anything other than new pads from time to time.

Despite that, there’s a good chance that sooner or later you will find you need to bleed them and that’s where Epic Bleed Solutions come in.

The best reason for bleeding your brakes is that it considerably improves their performance. Most hydraulic systems use fluid which is hygroscopic, meaning it attracts water. Over time, this water in the system can lead to a spongy feel to the brakes, so replacing the fluid is a smart move.

Other reasons for bleeding your brakes include swapping the brakes to another frame and needing to split the brake hoses, air in the system or even crash damage.

So there’s plenty of reasons to bleed your brakes but the problem is that most hydraulic brakes require a specific bleed kit from the manufacturer. This can be pretty expensive, for example the official Avid bleed kit for my Avid Elixirs (which need bleeding more than most) retails at £39.99. Ouch!

With that in mind, I was pretty interested to try the Avid Bleed Kit from Epic Bleed Solutions. Their Avid bleed kit costs just £12.99 with free UK delivery and includes everything you need for the job: Protective gloves, two syringes with flow locks on them with brass threaded bolts to attach to the brake inlet/outlets, an elastic band (!) plus more than enough fresh DOT5.1 fluid to get the job done. A really good package.

There’s full instructions, but I recommend a quick Google to throw up some official SRAM videos to help with that too as – although a simple job – with the Avids everything needs to be done in the right order.

All in all, I’m pretty pleased with Epic’s bleed kit, it’s well worth checking out. Other kits are available (for Shimano, Formula, Hayes and Clarks), as are further supplies of hydraulic fluid should you need it. RockShox Reverb users with the remote XLoc may also be interested to know there’s a kit for that too!

Filed under Accessories, Reviews in January 2012