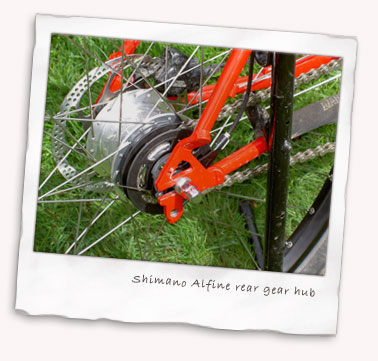 After riding singlespeeds for a few years, my knees started complaining about the stresses about 18 months ago. Not particularly wanting to go back to riding gears over the winter I looked at the limited alternatives. The obvious choice was a Rohloff 14 speed hub but despite having a great reputation for reliability they are super expensive for a winter mud machine. Or does that just make me tight?

EDIT. Feb 2010. The only question that remained in my mind at the time of this review was what was the long term reliability of the Alfine hub. Well it’s almost two winters worth of riding later and the cones feel a bit notchy so it’s getting a service. £25’s worth of service (Thanks CycleWorks!). Otherwise shifting is still beautifully smooth and it’s all on the same chain/chainring/sprocket. So not invincible but not too bad.

Fortunately for my wallet, at about this time Shimano released the Alfine, an upgrade of the Nexus 8 speed hub, with improved internals and most importantly a disc mount. Initially Alfines were like hens teeth (SJSC had bought them all) but Guy at Pearson Cycles pulled a few strings at Shimano to get me a hub.

Guy’s an old mate and he seriously took the mick—he’s a roadie at heart and was having trouble believing anyone would want to put anything as heavy as an Alfine on their bike. I think he was further taking the mick when he built up the hub with a full ‘freeride’ Mavic 327 rim, possibly Mavic’s heaviest rim.

His advice was not to put this wheel onto a bike but to give it to a boat owner to use as an anchor. And so the Bike Anchor™ was born.

Next thing was the build up. I bought one of the excellent slot drop–out On–one Inbred frames; which is strange since as it turns out most of the moles seem to ride On–Ones of one flavour or another. The hub fits just like a singlespeed, but with a full length cable from the 8 speed shifter.

I used the grey axle spacer and bring the cable down the chainstay (out of the muck). A Middleburn Hardcote 32t chainring, an 18t sprocket and a track chain complete (I’m pretty certain) a strong drivetrain. This equates to a gear range of about an 11t–32t rear sprocket coverage when using a 32t middle ring.

As an aside, I only just noticed last week that the crank is a Suntour (remember their drivetrain stuff?) off my first Orange ‘Aluminium O’ which makes it 17 years old!

The rest of the build was fairly ordinary, Tora 318 fork, Tektro hydraulic stoppers, USE suspension seatpost. The final touches are slime tubes in the wheels—you don’t want to be taking off the hub on an evening ride in the depths of winter. There’s also Panaracer Trailrakers for winter riding and a lovely 15mm Snap–On ratchet spanner for adjusting the 15mm hub bolts.

Oh and don’t forget the obligatory bell. After 18 months the only change has been the removal of my ‘badge of shame’ (flat bars, a 120mm stem and bar ends) and the replacement with a 90mm stem and an oversized riser. Thanks for the ‘advice’ Matt!

Well reliability has been great, touch wood, so far. Even if it blows up On–One are selling new ones for £120.

I sometimes come home from a Wednesday night ride, leave the bike covered in mud and just bang off the excess before taking it out for a ride at the weekend. Next spring I might take out the internals and give them an oil bath, which seems a sensible thing to do but that’s all I’m planning.

Shifting—this is weird at first, for two reasons. Firstly its reverse–normal which takes a while to become instinctive, especially when you are swapping bikes. You find yourself grabbing a higher gear in an emergency when you want the opposite until you’ve reprogrammed your mind.

Secondly shifting in all but the direct gear (4th) can be so quick and smooth that you can sometimes shift again because you don’t think that the gear has changed. Remember that you don’t need to be pedalling to change gear either, a very handy feature.

You can see a couple of photos of my Inbred 456 with Alfine rear hub on Flickr.

Filed under Components, Reviews in December 2008