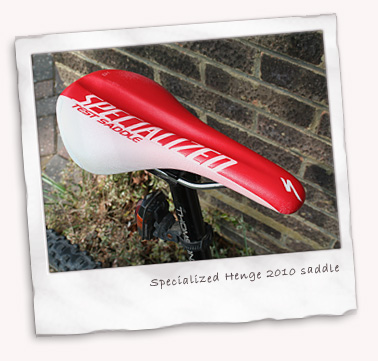 Specialized have earned themselves quite a reputation over the years for their Body Geometry philosophy to bikes and components. This is expressed most clearly in their wide range of mountain and road saddles which come in lots of different sizes and price points.

The Specialized Henge is no exception. For a long time I’ve been using the Max Flite Gel Flow saddle from Selle Italia on my Inbred hardtail which was passed on to me by a disappointed Tony who just couldn’t get on with it. Personally, it was OK for me and I quite liked the pressure relieving cut-out in the middle.

What I didn’t like was the ‘floating’ back end of the saddle. Normally, everything was fine and it often felt like you were being nicely cushioned but occassionally it would be coming up as I was moving down and that was uncomfortable! When Dave turned up with the base model Specialized Henge test saddle from Cycleworks I was quite happy to give it a go.

This particular one was the 143mm wide version. For those who don’t know, the idea of any saddle is to support the bones you sit on rather than your backside as a whole. Get this right and you’ll find most saddles will suit you quite well. Unfortunately you can’t tell how far these sit bones are apart just by looking so things can be a bit hit and miss.

As a Body Geometry centre, Cycleworks have a nifty little slab that you sit on to determine which width best suits you. I’ve always found 143mm to be ideal but Dave seems to need a wider saddle and didn’t find the Henge to his liking. Hence it was passed to me for a trial.

So what can I say about it? First off, it’s available in black only in the UK which was a disappointment to me as the idea of a white version for my Inbred would have resulted in an instant sale. Instead, the black is rather drab looking if you ask me.

The test saddle itself was a two tone red and white effort which clashed horribly with the pink detailing on the bike and the red started to rub off over time, leaving dye on my backside and across the white parts of the saddle too. Again, pink and white would have sealed the deal…

That’s not so say Specialized haven’t put any effort into the styling though. The underside features neat little allen key styled rivets and a polycarbonate shell printed with the contour lines presumably of the upper surface of the saddle. There’s also a neat, tiny Specialized logo near the nose.

On the top, the nose itself is slightly broader than the norm but retains a smooth bulbous drop. There’s a – pretty much de-rigeur – pressure relieving groove along the middle and some faux kevlar scuff guards on the rear edge. Overall the shape looks just right for getting on and off the back of the saddle without snagging your baggies (shorts or otherwise) as there’s no pronounced V-shape which has often been seen on Specialized saddles in the past.

As for riding, well putting it on my hardtail immediately showed just how uncomfortable that Selle Royal saddle had been! In fact I was amazed at how nice it felt as this is the first time I’ve tried a Body Geometry saddle, despite a good few other riders swearing by them. Well, now I’m an evangelist too as this was truly comfortable. 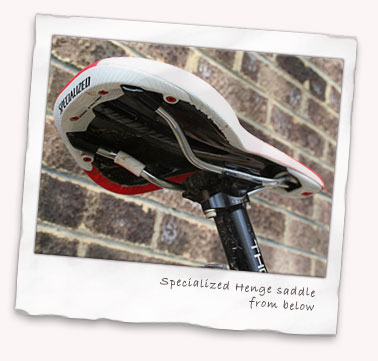 I’ve been very reluctant to return the saddle if truth be told and have managed to put at least a couple of hundred miles on it while I’ve had it. It’s not caused me any problems at all on long XC rides and technical terrain alike, so with the caveat that different people suit different saddles I’d say this is well worth trying out, especially if your local bike shop makes test saddles available.

Would I buy one? Yes I think I would. Although the saddle is a bit synthetic looking and rather boring in black it does offer a lot of comfort – comfort I hadn’t realised I was missing until trying this. Unfortunately the white seems to be as rare as hen’s teeth which is quite a disappointment.

My advice is try before you buy but if you’re like me you’ll be very happy. As I said, saddles can be very subjective but this one seems a winner.

Filed under Components, Reviews in April 2010