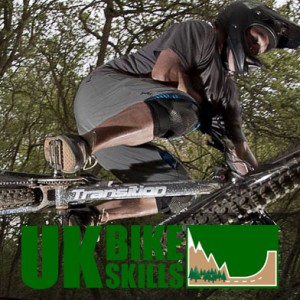 It was back in May that Karl alerted the Moles to the fact that Tony Doyle – “The Jedi” – had a public skills day scheduled for July.    I had been on a  1-1 session last year and was keen for a refresher.  Tony has an outstanding reputation for bike skills training, but the downside is that his courses are booked out months in advance, so the chance to go at relatively short notice was not to be missed.

So it was that accompanied by Roadmole, I met up with Karl for a pastie and coffee at the Watton at Stone bakery, before the short drive up the road to Tony’s training area.  In total 8 participants assembled at 10am in the deceptively sunny parking area, including Lee from Diary of a Mountain biker.

Tony, accompanied for the day by his 15yr old son Nathan, started off with a skills check, which involves the apparently simple task of riding in a figure of 8 around a couple of sticks, then trying to hop over one of them. Having identified some areas for us each to improve, we practiced the exercise again then headed over the jumps area.  The sky had quickly darkened and soon a heavy shower had started.  A few of the smarter riders had brought waterproofs, but the rest of us simply had to man up  – for most of the day the weather alternated between light rain and solid downpours. 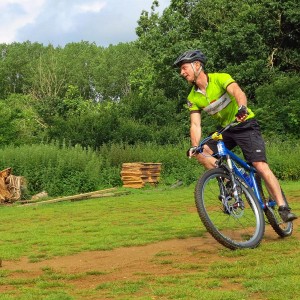 The jumps area is a series of humps, ranging from about 6” to about 3’ where we practiced our techniques on progressively larger jumps – with the added benefit of getting in some quality breaking practice on the increasingly slippery downhill landing area, with the incentive of avoiding an encounter with the hedge. 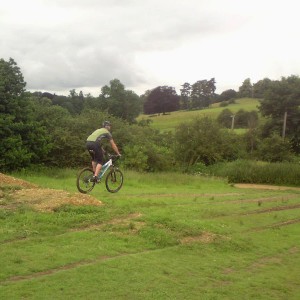 After getting the basics of the push established in the jumps area we moved onto the trail.  Tony broke this down into short sections and we worked on applying our skills to riding features such berms, flat corners, rock gardens and small drops.  Over the next few hours we progressed to link these sections a eventually were riding the whole trail, with encouragement and corrections from Nathan and Tony, often with the help of watching ourselves on Tony’s camera. 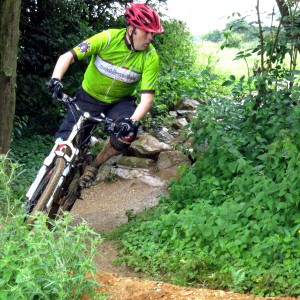 By now we were starting to tire mentally, which I noticed as I started making mistakes on sections I had previously ridden well.  So we adjourned for a break and some coffee before Tony took us to his drops area where there were a couple of drops of about 12’ – 15’ each, one with a nasty looking vertical section.  However Tony said they were both easily rollable and Nathan demonstrated this.  Karl was soon having a go but I found both looked very intimidating.  After a few minutes, I decided to have a go at what looked like the less outrageous one.  Seconds later I was on the flat, with a foolish grin and taking the bike round for a couple more goes. 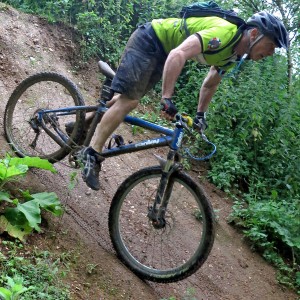 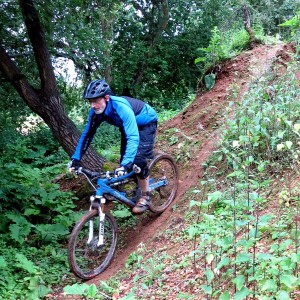 Muddy John – it definitely looked steeper from the top!

The day drew to an end with a walk around the North Shore area that many will have seen on Tony’s videos – but narrow planks of wood 15’-20’ above the ground look even more intimidating in real life.  Tony said there were only two people who could ride the lot, and they were both with us, but unfortunately the rain had made the wood to slippery for any demos. 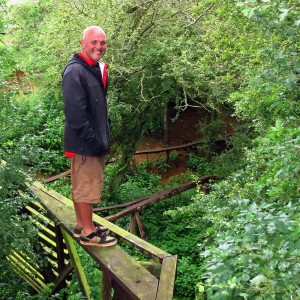 The sun returned to round out a fantastic day and as Roadmole and I carefully stowed our muddy bikes in the Mondeo, next door one of our fellow participants had his bike on a stand for a full strip down – to fit it in the back of his Masserati.  As we headed towards the M25 my takeaways were surprise that although I thought I had remembered most of the skills, how much I benefited from the refresher.  And the satisfaction of doing one of the drops, tempered by the regret I didn’t try the harder  one.  For anybody considering whether or not to spend up to £180  on a 1-1 session, all I can say is that a session with The Jedi is by far the best upgrade you can ever make to your bike.

Read Tony’s own view of the day.