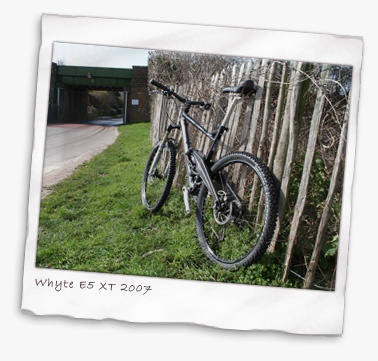 Well, as you know I’m in the market for a new bike. So, as promised, here’s the first in the series of write ups about my experiences. First up, a review of the 2007 Whyte E5 XT.

First of all it has to be said the Whyte wasn’t really on my list for a new bike.

A large part of that is to do with the reality that I have been riding around on a 2003 Rift Zone Quad for over three years now and to be honest I just thought the Whyte would be more of the same.

It shares the same philosophy of counter rotating pivots that was first introduced with the 2003 Marins, although the execution is somewhat different. The linkages now all sit within the main triangle keeping the shock well shielded from the worst the UK weather can do and giving 5″ of rear travel.

Up front there is quite a departure from nearly all Whyte designs of the past – a ‘conventional’ single crown fork giving 130mm of travel with lockout, supplied by Rock Shox in the guise of the well regarded Revelation.

This really is quite a change from previous Whyte bikes. Starting with the PRST-1 and it’s curious front suspension arrangement, continued with the JW-2 and even with the triple crown Maverick DUC’s on the 46, Whyte has always managed to convey that ‘ordinary’ forks just weren’t good enough for the job. Which means either they were wrong all along, or Rock Shox have produced a corker (incidentally, Whyte also spec Fox forks on some of their other models this year).

As the name implies, the E5 XT not only offers five inches of travel but comes with close to a full XT groupset, with the shifters, front and rear mechs, cassette, chain and chainset all from Shimano’s popular stable.

Other details include carbon finishing kit in the form of Easton handlebars and seat post to compliment the huge carbon swingarm, and Hope Mini MONO disc brakes. Hope also makes another appearance with their super clicky hubs which are mated to Mavic 717 rims.

It should be pointed out that the test bike from Cycleworks came with a low rent (but less nickable) alloy seat post with a WTB saddle and the tyres had been swapped for Panaracer Fire XC 2.1s from the standard Continental Vapors.

All in all, the bike makes up a nicely finished, intelligently thought through design that nonetheless appears less than the sum of its considerable parts. This is probably to do with the dowdy black finish which manages to make the bike look practical (in a £3K way) rather than pimpy – please Whyte, remember that da Vinci was an artist as well as an engineer! Leave room for some aesthetics!

Now previously I mentioned that I wasn’t really considering the Whyte, for a number of reasons:

So the E5 had a lot against it before I even got on the saddle. I’ll also freely admit that I haven’t tried any of the new breed of super XC / All mountain machines before so was a bit wary of having 5 inches of travel at my disposal.

And then, Sunday morning, out on the trails, I discovered some of the most inclement weather we’ve had for a while had made practically every track a real lottery of nerve and balance. To cap it all, I was riding on Panaracer Fire XCs which are probably not what you would be looking to use on wet chalk and clay.

My first few miles were circumspect to say the least although a few things quickly became apparant. First, the riding position felt very high up making me feel like the classic giraffe on ice. Second, the tyres really were going to make the ride a real test, and third, the small bump compliancy of the suspension was fantastic.

I quickly found also that I could lift the front end relatively easily with a quick backward shift on the saddle. Even so, it took a while to dial myself in to the bike. I slithered round the back of Polesdon and down the Stone Bridge descent, which made me think I needed to get my weight a bit further forward to help the steering.

After breezing up the slog to Ranmore (almost a pleasure with crisp shifting gears and lightweight frame to haul around) I decided to tackle the LandRover descent – perhaps a bit foolhardy since I was on my own in atrocious conditions.

Knowing that the Whyte E5 had five inches of travel I could have just blundered down the descent but the unfamiliar tyres, high perceived riding position and wet rootiness made me decide to pick my line down – after all, I wanted to see how much control was available to me.

It wasn’t a comfortable descent as I was very nervous of the slick tree roots but I made it down without any scares and only a few characteristic chirps from the Hope brakes. The bike still felt ‘big’, but I hadn’t fallen off!

So, I climbed back up to Ranmore and headed toward the Denbies descent into the Vinyard. Humming nicely over the concrete road to the top of the descent I started to get into a groove. The ride was beginning to feel very good indeed and I was able to crank up the speed and carry enough of it into the top part of the trail to bring a smile to my face. The quicker I went the more the suspension started to gobble up the trail, helped in no small part by the fluid action of the forks which helped keep the front wheel solidly where I wanted it.

Arriving at the bottom I felt I had begun to get something out of the bike. I took it up Box Hill, struggling somewhat with my continued lack of riding fitness and then literally threw it down Juniper Bottom, marvelling at how I was able to pretty much stay seated thoughout. It’s normally a good sign when you run out of gears on what is normally a rocky and rattley bone shaker of a descent.

The last part of the ride was on the bike path back to Leatherhead where I probably had a strong wind behind me. Either that, or I had just come to realise the bike wanted to go fast.

So, to sum up I would say the bike is definitely on my possible list. It is like the Rift Zone Quad I’m used to – great small bump compliance but ramping up solidly at the end. But it doesn’t flex like my Rift Zone, it swallows all kinds of bumps with gusto and it comes into its own when you up the speed, both up hill and down. The fork and suspension work extremely well togther but I’m still a bit unsure of it in the technical bits mainly because it felt huge. That’s possibily as much to do with my own wariness over the trail and the whole long travel novelty thing.

Best ride I’ve had in nine months though.

Filed under Bikes, Reviews in March 2007