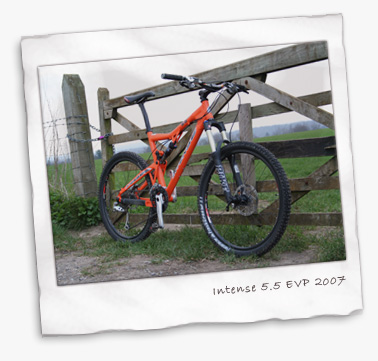 Continuing my series of write ups on the demo bikes I am trying out, today was the turn of the Intense 5.5 EVP. Previous rides have included the 2007 Whyte E5 XT and three test bikes at the Cycleworks demo day (Orange Five, Intense 5.5 EVP and the Marin Attack Trail, all 2007 bikes).

After my less than positive experience of the Intense 5.5 at the Cycleworks demo day I thought it would be worth giving it a second chance to see if it could win a place on my shopping list.

This demo bike came equipped with a spec more in line with what a prospective buyer might put on the frame. Starting at the front was a Rock Shox Pike 454 Air U-turn giving an adjustable 110mm – 140mm of travel at the cost of 4.7lbs in weight. This was bolted to a Hope Pro II hub which was spinning a tough DT Swiss 4.1 rim, so it was a pretty solid front set up.

The front wheel was matched by the same spec at the rear, with both wheels running Panaracer Fire XC Pro’s, as did the Whyte E5 I tried. Cycleworks certainly have a lot of faith in this tyre although I think I would consider alternatives from either Kenda or Continental.

As for the drivetrain, this consisted largely of the ever popular Shimano XT for the chainset, front and rear derailleurs with the shifting handled by Shimano LX trigger shifters. These were possibly not my first choice on this kind of bike but probably a reasonable compromise if you had blown your budget on the forks and were looking to cut back unobtrusively in other areas.

They performed perfectly well and reminded me of how under-rated the LX family is in the Shimano range. Similar cost saving measures on the bike included a Cane Creek headset and a non-quick release seat collar which I personally thought a step too far especially for this type of bike where you would think the rider might occassionally want to drop the saddle. To be fair though I suspect that part of the reasoning was to make opportunist theft of the saddle and seat post less likely given that it was a demo bike.

Braking duties were assigned to Shimano XT disc brakes which performed remarkably well although personally I wasn’t a fan of the lever shape which made two or even one finger braking less than optimal. The new Hope brake lever for example offers a much more comfortable lever shape. However, the XT brakes, despite their nondescript looks stopped me with the minimum of fuss each time and didn’t squeal at all which made a nice change.

Finally, the finishing kit was pretty top notch – a 90mm Thomson stem and Easton high rise bars (not carbon though!), Thomson seatpost with layback and an SDG Bel Air saddle.

So, there you have it, a pretty sensible and realistic build up over which we could argue the details until the cows come home. It’s largely a matter of personal taste and we know what a short supply there is of that in the biking world – purple Lyrcra anyone?

In a review like this though most people are going to be interested in two things. Firstly, in the quality of the frame itself (since it retails for £1469) and secondly in the ride of the bike out on the trails.

Well, the frame quality is very high in a way that grew on me throughout the day. My initial thoughts, superficial as they invariably are, was that the frame didn’t look very special for a £1500 frame but I think that was largely the fault of the colour.

This frame has lots of very subtle contouring of the tubes with plenty of both concave and convex surfaces and I think that would be better shown off in a good quality metallic finish rather than the solid orange of the demo bike, which managed to make the frame look heavier than it really is. Hopefully in the photos I’ve managed to illustrate some of the subtleness going on. My favourite part of the bike was the downtube which went from a narrow diamond shape near the headtube to a much flatter diamond near the bottom bracket giving a sharp definition to that part of the bike.

The frame has four pivots connected by short linkages that conspire to create a Virtual Pivot Path (VPP) which in reality means that unlike a single pivot bike that has a fixed pivot point, the Intense 5.5 and others of it’s ilk has a pivot point that wanders around at the will of the designers but which for the sake of argument I’m guessing sits roughly near the front wheel. This arrangement has the benefit of allowing the designers to optimise the bike for specific types of riding.

The swingarm consisted of carefully manipulated aluminium with none of your hydroformed nonsense going on here, just good old fashioned tubing which was braced vertically by two sweeping curved struts near the seat post that still managed to allow for plenty of mud and tyre clearance. The frame was fitted with a Fox RP23 shock which I found completely unnecessary for this bike, mainly because I still doubt the benefits of a platform shock at all. I prefer things to be as supple as possible.

So, we have a fantastically crafted frame with sensible bits hung on it (not counting the rider) and it fitted me so that’s a good start. In fact, it felt just right size wise. I headed out onto today’s perfect trails with high hopes as I wanted to test it in the sort of conditions and over the sort of trails that make up my normal riding habitat.

First, we headed off up to the Saw Mill in Norbury Park and then threw the bike down the descent alongside Bockett’s Farm in Bookham, near the edge of one of their fields. This gets really muddy in the winter from all the horse traffic and is a rooty nightmare but today conditions were good. I’ve ridden all sorts of bikes down this descent and it takes a fair bit of control and concentration to pick a relatively smooth line down through all the roots but not today. The Intense went exactly where I pointed it, helped no end I believe by the Rock Shox Pikes which were a revelation (pardon the pun) to me. I just couldn’t believe how plush they were, or how laterally stiff they were. They just refused to be deflected off line.

The back end was similarly impressive. As with the Whyte E5 the more speed you piled on the more it seemed to just sit down into a sweet spot that let the bike literally flow down the trail. It was a great confidence inspiring first run of the morning.

From there we took the Intense 5.5 over to Polesdon and round the back, up to Ranmore. It was here that I started to notice other details of the ride which suited me less.

My riding round the North Downs splits into two halves. On the one side is the fun to be had in the sweet singletrack stewn through the Surrey Hills, covering Holmbury Hill, Leith Hill and so on. On the other side, there are lots of hard, grinding miles on flinty, unforgiving bridleways interspersed with wild but short descents. This side forms the majority of my riding from my door since to get over to Holmbury Hill and Leith Hill takes some sort of motorised transport.

So it’s important to me that a bike can adapt to quite a wide range of conditions. With the Intense 5.5 EVP, as we started to pile on the miles it became apparant that it lacked some suppleness in the early part of it’s travel, an area where my 2003 Marin Rift Zone is particularly fluid. It was akin in many ways to actually riding a hardtail in those conditions and certainly despite the advantage of the full suspension I found I was very conscious of the terrain under the wheels.

From a technical viewpoint though all was well, in fact for a 5.5 inch trail bike it climbed very well indeed with few problems with the front end lifting. I left the Pikes wound out to the full 140mm travel and didn’t feel hampered at all although it was nice to know I could have dropped them down an inch if needed. Maybe on a really technical climb that’s what I would do.

Once we had gained some height we threw it all away again down the Land Rover descent toward Westcott which today was fantastic in the dry, grippy conditions. The Intense just ate it up, it really seems to come alive on the downhills and I felt very comfortable with it, unlike the precarious nature of the Whyte E5 when I tried that. Back up to Ranmore after and then down through the Denbies Vineyard and here I realised I was really starting to push the bike, with a controlled two wheel drift at the top of the descent and a great deal of speed carried all the way down. Superb stuff.

And that really was the pattern for the rest of the day. Good climbing ability (without seriously challenging it technically), firm trail manners and loony descending powers meant I had a highly enjoyable day on the bike. It’s a bike I would think would suit someone who had the enthusiasm to push it hard every time they rode it because as with the Whyte E5 (in a completely different way), this bike needed speed to come alive at which point it made you do things on a bike that you didn’t think you could do.

Overall though, I don’t think this is a bike for me, mainly because of the disappointing ride over the trails I ride consistently. I made sure I had the shock fully active and that the rebound was set relatively slow but even so I felt the suspension was optimised for when the going got lumpy at which point the bike was able to carry more speed than I thought possible. A great bike in many ways, and I guess one that shows Intense’s racing heritage. Many people will love this bike and rightly so, if you’re looking for downhill fun or have spent years XC racing and are looking for a fresher challenge then this could be the bike for you.

For me though, I’m still looking. I think I know what I’m going to buy, but watch this space for the next review.

Filed under Bikes, Reviews in March 2007