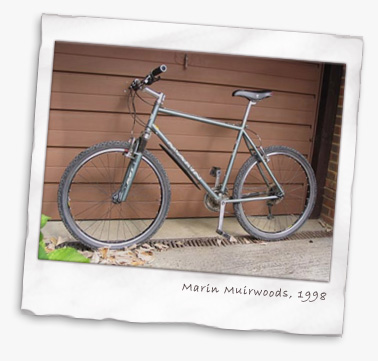 I feel very nostalgic about this bike as it was the first ‘proper’ MTB I owned.

It’s covered a fair few miles now and been out to the Alps (who says you need discs!). The riding position has always been compromised by my naivety at the time I bought it as its a 19″ frame and has little standover height. I guess the 17″ frame would have been better but at the time the trend was very much for a stretched out XC type of ride, with narrow bars and so on.

Since January 2003 it took a bit of a back seat as I concentrated on the Rift Zone but riding it on a few occasions confirmed what a fundamentally good frame it had.

Constructed out of steel, the current material of choice, it had strength and a lot of life about it which made me think about building it up into a lightweight, efficient trail bike using some of the best of todays components.

So, I took the plunge and invested in a full LX groupset for the bike as the most economical way forward. Having recently bought some Mavic 317 disc only wheels for the RZ meant that I had a set of essentially brand new 221s to go on the Muirwoods as well.

After that, a new saddle, substituting a Ritchey ball basher for a WTB Speed Comp and some Easton EA50 2″ risers with Yeti grips hugely improved things and showed the frame to be beautifully flickable on the trails.

OK, so the fork is a massive hindrance and will ultimately cap how much performance I can get out of the bike and being forced to use V brakes as well pretty much forces it into the summer only bracket, but I do think it’s a versatile frame that’s worth hanging onto.

Ultimately, all the components will migrate onto an On-one frame, leaving me with the frame to build up again. And I’m thinking a swift road bike with flat bars, carbon forks and narrow tyres could make an interesting project.

Hopefully this one will run and run.