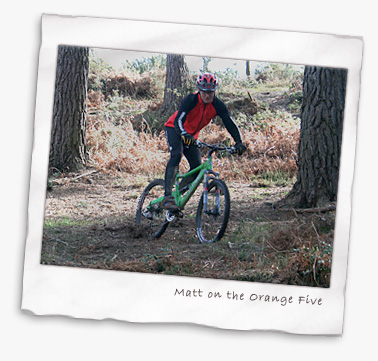 Well, as has been documented, on March 11 the Muddymoles made their way over to Holmbury St. Mary for the annual Cycleworks Demo Day which, through careful planning did not fall on Mothering Sunday for a change. As a result, Mark and myself were able to attend almost guilt free.

This particular mole has a particular interest this year as I’m looking for a new bike and really don’t have any fixed ideas of what to go for. Three years ago I bought the Marin Rift Zone, the first of the Quad linkage designs and while it has seen me through many miles I’ve now reached a point where it’s apparent that it lacks in comparison to the latest breed of trail bikes. And to think when I bought it I said it was me and not the bike that needed to improve!

Finding the simplest way round a problem is to throw money at it, I’m now looking for a comfortable but fun loving 5 inch travel trail bike that will happily cover the miles as well as turn all impish when I want it to. With that in mind, on the day I rode the Orange Five, the Intense 5.5 and the Marin Attack Trail. All these bikes come with strong reviews from the cycling press and I was interested to see how they stood up to scrutiny.

It is an unwritten and unfairly held view in life that first impressions count for something. But unfair as it may be, the Orange scored maximum points straight from the off when I was presented with an electric blue Five SE to ride at 9:00 in the morning. Sunday’s don’t really get much better than that especially since the route in prospect was round some of the Surrey Hills’ well regarded singletrack.

The Five was equipped with a Fox RP23 shock, X.0 shifters and rear derailleur, Easton carbon handlebars and the latest Hope Mono Mini brakes with braided hoses. I got the shock set to have plenty of sag and left it open since I wanted to compare my Marin’s inherent anti-bob characteristics with those of a single pivot.

Unlike some riders, I haven’t grown up with single pivot technology. I went straight to the Quad suspension from a hardtail so am not well placed to have an opinion. Having said that, the opinions I had read elsewhere suggested the Orange should be prone to bob when climbing and brake jack under braking.

My experience was quite different. First, the bob wasn’t an issue even with the shock wide open. I’m more of a spinner than a masher anyway which I think helps quite a lot, but then in my experience it’s generally a more efficient way to get up and down hills on a bike anyway. The rear suspension felt wonderfully comfortable with none of the exaggerated ramp up at the end that I get on the Marin and seemed able to roll up and over most obstacles I encountered. Second, when it came to the downhill twistys the bike just wanted to go for it (no, it had nothing to do with me at all, oh no!).

A major factor in the bike’s startling performance on the singletrack must be the geometry of the bike itself. The trails were generally dry and grippy and I was able to hustle the bike along quite nicely, catching people up more often than not. I just felt that I knew what the bike was doing without it needing to stand to one side of the trail with a megaphone and flash cards shouting instructions. And yes, that is a silly thought but I hope you understand what I mean. Put it another way, it was like the original Mini in it’s handling – think and suddenly you’re there without anything seeming to happen in between.

I came back from the ride extremely impressed by the bike. After only three miles I was sufficiently enthusiastic to start to wonder how it would fare over an all day ride, as well as wanting to go back and throw it around the trees again. That’s the first time in ages I have felt an emotional response to a bike.

It’s also worth commenting on the SRAM shifters which took me a while to understand. Once I did though I loved them and their slickly chunky action as they seemed to compliment the bike’s character perfectly.

So in summary, the bike looked great (and when you’re spending a lot of money that does come into it), could hardly be better specced and delivered the goods on the trail. A tough act to follow.

Now this bike was the one I had the most hopes for before I rode it. The manufacturer talks at length about it’s Virtual Pivot Point suspension, I’m used to the Quad rotating pivot thingy, ergo I should like the Intense.

Probably that reasoning is sound and I will like the bike but unfortunately I didn’t get a ride on one that fitted. The Intense guy said it was a medium frame, in fact I think it was marked as a medium frame but there is no way in this world that it was. We even offered it up against Cycleworks’ own Intense demo which confirmed that ‘my’ bike was a couple of inches longer in the top tube.

Which took the edge off the whole ride. The front lifted like a startled racehorse at the whiff of a climb which made it difficult to assess the efficiency of the rear suspension (although it appeared to have liquid manners at speed). On the twisty downhill sections I had to really get as far forward as I dared to drag the bike round the corners, but I did find I was going quite quickly in doing so, again catching slower riders.

I don’t think this bike had a fair chance which I will try and address by borrowing the Cycleworks demo bike for a weekend. It was lunatic fast when the open trail pointed down and the final run into the car park was terrific, but the sizing was wrong, simple as that.

Spec wise, it offered a complete change to the kind of bike pimpery normally associated with such an exotic frame. Magura Menjas (which we recently highlighted) were installed up front and did seem to be a good compliment to the frame. The double arch design is deceptive as there is a lot of metal providing bracing effort to the rear arch, and the action of the forks was incredibly smooth (and I’m doing my best avoid the word ‘butter’ here). Grabbing speed back when the frame was given its head were Magura Louise brakes and boy did they haul in the bike. They could lock the wheels comfortably at any speed but were capable of sufficient modulation to make it apparent that if you were locking wheels it was ham-fistedness on the riders part not theirs.

To sum up, a quality frame, interesting spec but not the experience I anticipated. I’ll try again but sense this frame is brilliant but maybe not endearing. The extra pivots of the VPP suspension also seemed less robust after the stoutness of the Orange.

I’ll admit I wasn’t really interested in the Attack Trail for several reasons, principally its’ relationship to my existing Quad. Now this is a bit like saying Princess Margaret was a bit like the Queen – it’s true but irrelevant because each has a different role to play in life but none the less the comparison is there. There’s also, and sorry to keep harping on about this, the fact that there are no custom bike colours available. I know it’s silly but my God does the Attack Trail look drab alongside a lime green Orange.

I also went from feast to famine on the frame fit side of things. This frame claimed medium but was so short we seriously debated whether I was riding a 15 inch frame. I felt like I was on a monkey bike, which again massively compromised the experience but still allowed a great deal of fun. But I knew right away I wouldn’t want to do more than five miles on the bike let alone an all day epic.

At the end of the day this bike was too ‘freeride’ focused. I had fun but it wasn’t practical, even lacking a third chainring which showed where its intentions lay. Coming back to the car park I pushed it faster than either of the other two though but maybe I was just glad to get off the thing.

To finish up, I would say based on my gut feelings from only riding these bikes for about 45 minutes each the Orange Five was a clear winner that had bling and ability, the Intense needs a second chance and the Attack Trail I’m not interested in at all. At the dream bike level, being able to choose frame colours suddenly becomes stupidly important and finishing kit the final dusting of sugar on an already sweet offering.

And you’d be right!