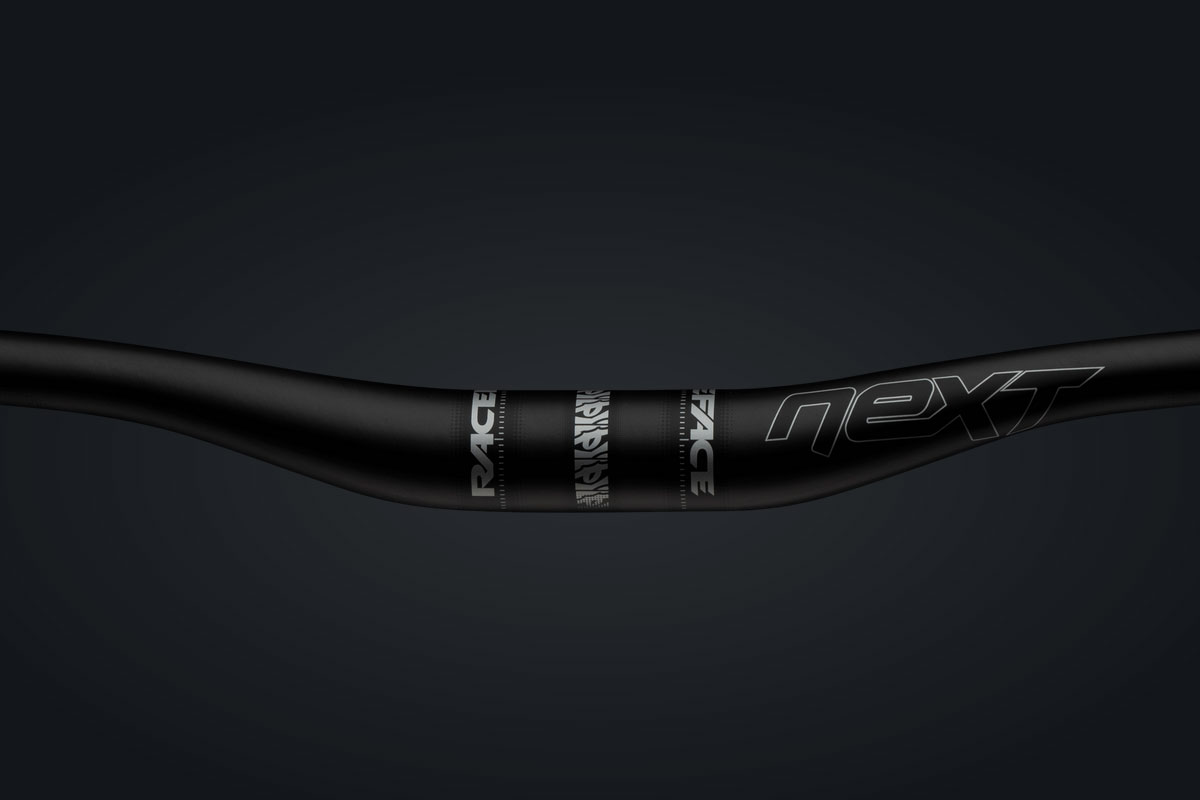 Handlebars are very personal bits of kit, but is the Race Face Next 35 carbon a Goldilocks option?

Well, I think it might be. The modern consensus is that wider is better but while that may work for some riders on some trails, it is easily possible to go too wide. This is especially apparent on natural trails in close proximity to trees!

Back-in-the-day, wide bars used to mean something up to 700mm wide. My old Orange Five had carbon Easton bars on it that turned out to be 665mm wide and I used to have some 700mm pink alloy Azonic handlebars on my singlespeed On-One (with a 25.4mm diameter!). They always felt perfect.

But times change. These days wide means 800mm; in fact some might say that is quite mainstream. I don’t really agree with that though because it depends as much on the rider as the bike. If you are less than 6 feet tall, 800mm feels a bit of a stretch because it is likely to be a lot wider than your shoulders. If you are female – speaking in general terms – the problem is even more pronounced. Fine for a downhill run or two, not so much for a day of trail riding.

Then there is the problem of those trees again. I can think of several spots where clearance is an issue on the Surrey Hills; Inky Blackness, Lloyd’s Left Leg, Rumble in the Jungle and TNP for a start. It’s just too easy to snag a bar end and head off to a painful landing. That’s where the Race Face Next 35 carbon comes in. 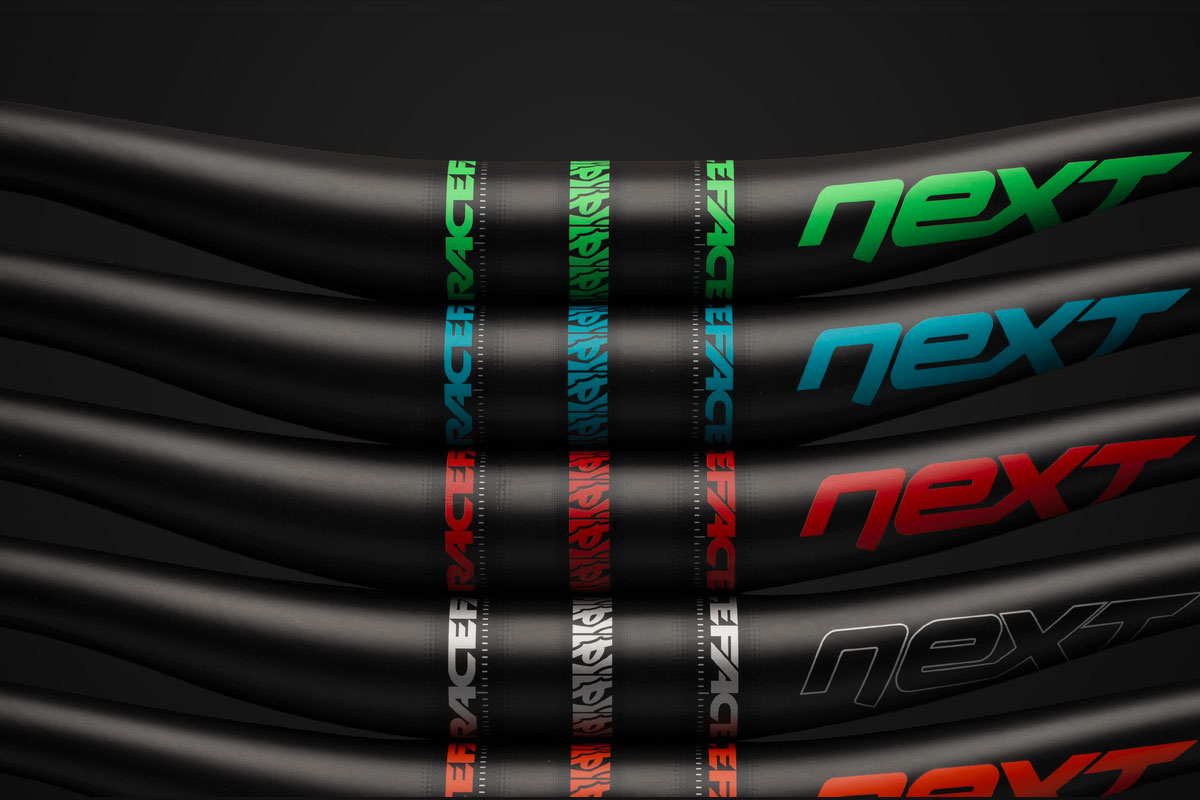 About the Race Face Next handlebar range

For a start the name ‘Race Face Next 35 carbon handlebar‘ is a bit of a mouthful isn’t it? I am constantly getting confused over Race Face model ranges because the names don’t tell you anything about their size or purpose.

To unpick it a little there are a number of models in the Race face Next range, and in order of suggested riding you have:

Why the different widths? Can’t you just cut a wide bar down? Well, beware, wide bars are built to take the stresses of their specific width. Cutting wide bars down just leaves you with a shorter, stiffer handlebar than it needs to be, so understand what you want and buy accordingly.

All of these handlebars are 35mm in diameter for modern stems (like my Nukeproof Horizon stem for example), but the middle ground Next can also be had as an old skool 31.8mm diameter too, limited to 720mm.

To make my life simpler, I just like to say the 760mm Next handlebar, which by definition is carbon and 35mm diameter. That is what I am reviewing here. 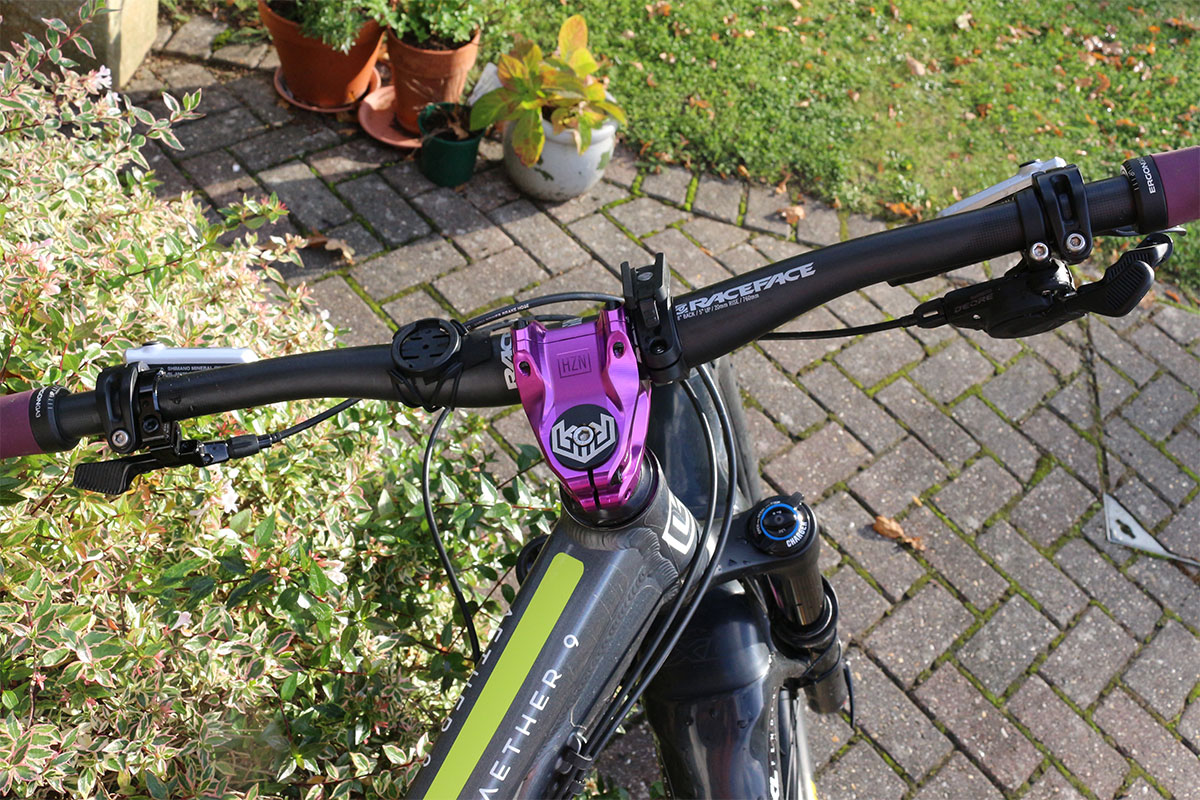 Why the 760mm Next handlebar (i.e. the Race Face Next 35 carbon handlebar)?

I actually have the 760mm Next handlebars on both my current mountain bikes, the Bird Zero AM hardtail and the Bird Aether 9 full susser, both with a 20mm rise. This came about because I originally had an alloy Race Face handlebar on my old YT Jeffsy that was – wait for it – 760mm wide. But called the Aeffect handlebar (don’t even go there…).

Now I got on pretty well with the width of the bars, feeling that they suited my riding style pretty well. I am about 5 feet 11 and 760mm seemed to give the benefits of a wide bar (e.g. a more open chest and better steering control with a shorter stem) without getting so wide that I might catch the bar ends on trees.

I found the hand positioning worked well with 8° of backsweep and 5° of upsweep. The only trouble with the alloy Aeffect bars is they are stiff as hell. There isn’t any flex at all which might work for some people, but not for me after long mornings out riding the hills.

This prompted me to look for a handlebar that had the same dimensions but in carbon to see if it would take the sting out of things. When I built up my Bird hardtail I chose the 760mm Next handlebars and liked the result so much I treated myself to the same for the Aether 9. I have not regretted it.

How do the Race Face Next 35 handlebars ride?

In short, the 760mm Next handlebars ride very, very well. I could end this review at that if I’m honest. Assuming that 760mm bars suit you I think you will be very pleased with the Next 35s.

First of all, the backsweep of 8° seems to fall comfortably to hand (but note I also use Ergon GA3 grips). The backsweep isn’t so extreme that it forces you into a weird riding position but just lets the controls sit at a comfortable angle. Mary bars these ain’t and in fact they are quite close to conventional numbers for backsweep.

Similarly, the upsweep is not radical. Again, 5° is pretty much par for the course but what is key is how the carbon is put together to engineer the ‘right kind’ of compliance. If you turn the bike upside down and push hard on the forks you can actually see the handlebars flex slightly.

Out on the trail you don’t notice any flex at all, either backward or vertically. The bars – to me – feel nice and accurate, perhaps helped by the 35mm diameter and that lovely Nukeproof stem. I know both my Birds go exactly where I want them to and if given the chance like to fly too. Despite this, I haven’t detected any hint of noodle-like behaviour from the steering, the 760mm Next 35s inspire a lot of confidence in the front end of both bikes.

After long rides across the hills you feel much less beat-up, particularly on the hardtail which can be quite a harsh beast. There is none of the high frequency buzz that you’d normally expect but more important is a nice supple feel. You point the bike, it turns, but with a subtle, fluid movement. Fast, gnarly sections of trail are dispatched without drama, without really thinking about what the handlebars are doing and certainly not ‘ooof that was a bit of a battering’.

I rarely buy bits for my bikes for the sake of it (I’m ignoring the hollow laughter I hear).

These days I err toward stuff that I know offers a noticeable performance benefit for the long term. It makes sense in terms of both cost and the environment and I really don’t want stuff breaking on me. So I have 12 speed Deore on the Aether, Hope floating discs, Hunt wheels and Maxxis tyres. Over time that’s the direction of travel for the hardtail too.

I have been impressed enough with the quality, comfort and handling of the Race Face Next 35 carbon handlebars to run them on both bikes. I’d recommend them to anyone in the market for a handlebar for their trail bike.

It’s not a night and day difference but it is significant, like the contrast between instant and quality coffee. You can get by on rubbish, but where’s the pleasure? If you haven’t tried carbon before you will be pleasantly surprised and the Next 35 handlebars in my view hit that Goldilocks spot bang on.

Filed under Components, Reviews in October 2021