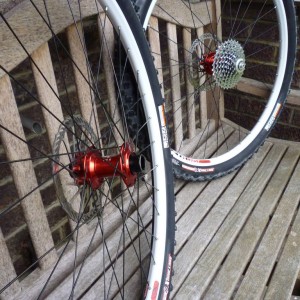 Sometime during last year I started to think seriously about how best to upgrade my Orange Five. It’s been a fantastic workhorse for me since 2007 and I’m lucky to be able to say it’s tricked out with what many people would call a dream-bike spec.

But there’s always room for improvement, both technically and visually. After upgrading the brakes to Avid Elixirs so that both my bikes use the same type of pads, I realised that the best place for me to focus was going to be the wheels.

Initially I was driven by the idea of stiffening up the wheelset as that was what a lot of others have been doing, using Stans Flow rims. But after posting an article on here another opportunity presented itself which was to build up a wheelset based on the relatively new Stans Crest rim.

The logic was simple. Really, my wheels didn’t need to be massively stiffer than the Mavic 819 on Hope Pro2s that I’ve run for the past 3000 miles. They’ve been amazing performers with no need to ever true them and taking everything I’ve managed to throw at them. The only citicism was they were not exactly lightweight rims and at 19mm width internally, not the widest either.

If I was going to change my wheels then a lower weight and a wider rim to better support my tyres was important, along with tubeless compatibility.

The Stans Flow rims were an option as I said and at 22.6mm they are certainly markedly wider than the 819s. But while I think they make sense for a 29er – where their extra stiffness helps the whole wheel – they offered no weight saving over my 450g 819 rims. Thankfully Tony, DaveW and others pointed me in the direction of Stans ZTR Crest rims which manage to save 80g off the rim while also being 21mm wide. It seemed a win-win situation to me, even if I then needed to add the marginal weight of the rim tape to make them tubeless ready.

But things weren’t so simple. Not only were Stans rims in general very hard to get hold of for most of last year, I decided I wanted a specific ‘colorway’ (sic) if I was going to fork out proper money for the first time in my life for wheels (rather than just ride what was on the bike).

I’d already got a subtle red anodising theme going on with my Five which started with my SRAM Redwin cassette with it’s red spider. That was joined by red KCNC jockey wheels and a red Salsa seat clamp and later augmented by those Avid Elixirs I mentioned which came with red anodised adjuster barrels. I realised this was the perfect chance to steer my Electric Blue Five in the direction of a smart Patriot colour scheme with white Crest rims on red Hope Pro2 hubs. So that’s what I did! 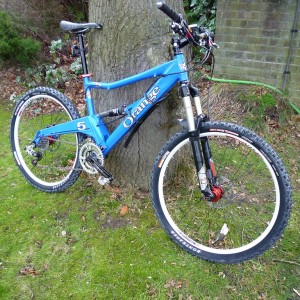 This meant waiting even longer for the wheels. I kept wondering if I should pay all that money for new wheels in the first place, kept scouring the web for availability and prices and generally worked myself into a state of paralysis over the whole thing. Eventually though, after a chat with Cycleworks I struck a deal for them to build up the wheels at the end of 2010.

Cycleworks were great (no, they’re not paying me for that), they managed to be competitive on price but also I trusted them to come up with the best combination of strength and durability for the new wheels. I had fancied the idea of red anodised aluminium nipples but Cycleworks advised that aluminium nipples were notoriously hard to tension and maintain, so brass it was, on black DT Swiss DB Comp spokes.

Again, lighter spokes were available but as a balance between weight and durability I think these win for my riding. Lastly they set up the wheels with the Stans tubeless tape and valves so they were all ready for me to put on the bike.

Before I did that I took them round to Dave’s for a weigh in and was very pleased with the numbers. The Stans ZTR Crest rim, Hope Pro2 and DT Swiss DB Comp combo, fully tubeless ready came in at 1670g for the pair. That’s just 770g for the front wheel and 900g for the rear, minus the skewers – I’m using a 20mm bolt through Maxle on the front.

Instantly that 1670g is around a 160g saving from the wheelset but the benefits of Stans No Flats system is it runs tubeless ready tyres. Bunging a set of Bontrager MudX 2.0 tyres on saves me a further 250g over my Nobby Nic 2.25 UST tyres (730g vs 605g a tyre).

A total saving of 410g just from upgrading my wheels is quite a significant benefit in my view. Of course the MudXs would have fitted my 819s with no problem but that’s not the point in my mind! Nor is the fact that the factory built Hope Hoops are much cheaper to buy have any bearing on the situation even though they are the exact same spec as my wheels – they were only available as black rims on black hubs anyway at the time (admittedly I think they now are available on the white rims). The point is I’m very pleased.

So how do they ride?

I guess this is what it’s all about. If you are going to upgrade your wheels and the visual side isn’t your only consideration (ahem!) then you’ll want to know how they perform. Well, first off, I think Cycleworks’ wheel build has been great as after about 200 miles or so the wheels are doing fine – no bedding in issues at all.

Second, they proved incredibly easy to get the MudXs onto my rims, probably a feature of that special Stans technology. I managed both wheels using just a track pump and again the tyres have stayed put with no sealing issues.

Finally, on the trails the bike feels like a very different beast from the one I have ridden to date. It’s significantly more responsive on the singletrack as a day at Swinley proved and is much better at handling direction changes. Not that the old rims were shabby (they’re going on my singlespeed) but the customary stability I got from the Five has been noticeably enhanced with a greater willingness of the Five to change direction.

The fact the bike feels so responsive suggests the wheelset is also at least as stiff as the old 819s which I’ve always thought of as being super robust in that regard. Getting up and over obstacles is less hassle too and of course lets not forget the Five now looks amazing, even drawing favourable comment from a guy at Swinley’s jump gulley.

My experience of this wheel upgrade has been nothing but positive and I would recommend you seriously look at your own wheels when the upgrade fairy next visits – I’m certainly thinking that my road bike will probably benefit hugely from upgrading it’s wheels, although perhaps Stans Crest on Hope Pro2 is a bit over the top for that!