I wanted to start my ride impressions by writing about some thoughts I have had about the overall testing process. First of all it’s a long time since I bought a complete bike and rode it that way. Generally I change parts to those that I am familiar with. Faced with a complete bike it is difficult to be totally impartial, given these are not the <insert part here> that I would have chosen etc… 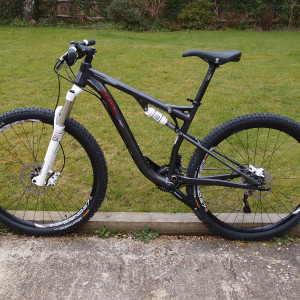 That out of the way I can get on with my initial ride impressions.

I posed a few questions in my initial article and one was ‘is the rear end stiffer’? I think I can say without any question in my mind that it is. Not that the Spearfish that I usually ride is flexy (and I am talking about the QR version that I have not the 142x12mm version that is also available), but run it down a rocky descent and I can feel the rear end flexing about. The Horsethief is much stiffer in comparison. This translates to a less deflected run on rougher ground, especially noticable where you have a fairly straight run from start to finish.

One issue that I am having is with the front end grip, which could easily be influenced by the many variables that are different to my usual bikes. One – probably the most likely – is the basic tyres, which I think give Continental quite a bad name given how good the Black Chilli versions can be.

The rear Mountain King is fine however and I weighed one at about 800g which isn’t too bad for a 29er tyre, although it does leave some room for a weight saving and a performance improvement at relatively low cost.

Another could be the Sektor fork, or rather the way I have it set up, as adjusting the rebound does seem to have made some difference. I’ll probably change the tyre or wheel for the rest of the review to see if that deals with the problem entirely.

It could also be that the slacker head angle and longer seat stays has subtly change the weight distribution compared to the Spearfish. Regardless of what it is I’m sure that with set up adjustments and a fairly small cost for a new front tyre this can be solved.

While on the subject of longer seatstays, I’d say that the increase probably doesn’t affect the handling too much on it’s own, but with the slacker head angle the overall wheelbase is 60mm longer than the Spearfish (for the medium frame). I think that is noticeable round the singletrack of the Surrey Hills but is it a show stopper? No. Could I get used to it and adjust my riding style to accommodate? Yes, most definitely, although again I think the 80mm stem gives a fairly XC feel and 10 or 20mm off that might make it a bit more “All Mountain”.

Overall the Horsethief has shown itself to be an easy bike to ride with no major bad habits.

Hauling 31 lbs up a long climb isn’t much fun, and if you have a lot of tarmac or fireroad climbs to deal with then a shock upgrade to add a platform would be a step forward as the back can get rather active. Under normal circumstances though I don’t think a seated, smooth-cadence rider will have much to worry about.

Get up and pedal, and the single pivot design with the basic shock does move about, but I think that is covered in the philosophy of the bike though. Essentially it’s a bike for hammering along the flat and speeding down hill. When you get to the bottom it’ll pedal back up again, but it’s not the strong point of the bike. The grins are had on the downs.

I am hindered with my riding at the moment as I seem to be suffering from a “just won’t go away” virus so for more thoughts on the Horsethief I’m going to hand the bike over to Matt. While I remember, it may be worth checking out the blog post on the Salsa website that covers the Horsethief design philosophy.

The Salsa Horsethief was loaned to us by Ison Distribution, free of charge for this review.