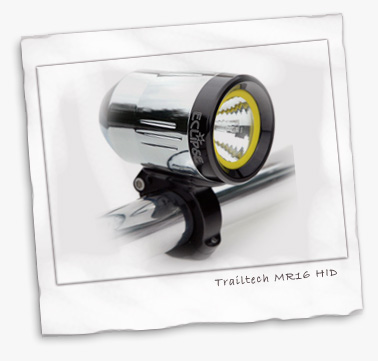 There are so many ways I could start this review but it’s probably best to keep it short, sweet and to the point. I purchased a Trailtech HID lamp based around an MR16 sized lamp via their UK distributor, picking it up for £140 inc. P&P (see Trailtech’s Single HID SCMR16 page for more details).

Now, I concede that is a lot of money for a ‘budget’ HID lamp, but boy does it output some light!

The unit itself is fairly bulky compared to a standard MR11 based unit such as the Hope, the Lumicycle or indeed the Topeak (which I understand is also a Trailtech unit) as the reflector is basically 50mm in diameter compared to 35mm.

As far as I know this is the only MR16 sized HID available and it produces 1850 lumens. Whether that is true or not is difficult to say but it does completely dominate Matt’s Hope and Jez’s Light and Motion HID which are rated in the 500-650 lumen range. Granted the output is higher as well, rated at 30 watts.

I was concerned about heat but the unit only ever got warm although I used the light sparingly for fast downhills and very muddy sections (yep, the mud is back). Trailtech don’t seem to worry much about firing the HID lamp back up after you have stopped which seems to be a concern with other MR11 based HIDs. According to Trailtech the ballast monitors itself and will not ignite if it’s too hot.

To power this baby I purchased some Lithium Polymer (lipo) batteries and chargers from a Chinese seller on eBay. Lipo batteries are much lighter and smaller than nickle metal hydride and make an ideal solution for MTBs but until recently have been very expensive (and still are in most radio control model shops in the UK).

Having checked with Trailetch in the US that the ballast in the HID will ignite with 11.1v I ordered myself four batteries with a capacity of 2400mah. Each of these should last just shy of an hour so three should be ideal for our 2.5 hour night rides. A few connectors and switches and an hour of faffage later I had a unit cobbled together.

So what are the drawbacks? Well it’s still getting on for £200 which is a lot of money for a light. It may be too bright which isn’t so much of a concern for me as for the others I ride with as it tends to cast a shadow in their HID beam. As Matt commented, its the nuclear option in terms of the annual lighting arms race…

The swivelling bracket that Trailtech supply also fell to bits on the first outing and required a mid trail rebuild (removing a screw to get at the screw that had come loose) but that seems cured now. Another downside is that my previously very adequate LED headlamp seemed to lose its shine.

So I guess that means a HID on the ‘lid’ is required!

Filed under Lights, Reviews in October 2007