It’s happening to an increasing number of Moles. Baggies are being dropped and the lycra that resides underneath is coming out into the air. Road bikes are the new MTB. 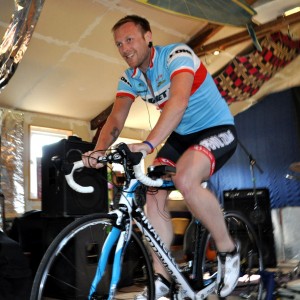 The last time I threw my leg over a road bike in anger would have been while I was at school and technology has moved on a long way in that time. STI shifters and carbon forks even on the most basic models.

One aspect of road riding I was worried about was you spend much more time in one position when compared to mountain bikes. Given I am prone to lower back and hip pain I decided that I need to get the bike set up properly.

Cycle-Fitting is the meticulous understanding of the intricate human interaction with a bicycle, with the specific aim of gaining efficiency, power and comfort for every rider. Because we are concerned with optimising human movement that is being applied to complex machinery, cycle-fitting readily draws upon from the disciplines of ergonomics, bio-mechanics and kinesiology.

Luckily for me a rider who has been out with us in the past happens to be a Personal Trainer/Instructor/Bike Fit expert and I was able to engage his services for this activity. I’ll put a little bio for Nick at the end of this post but for now lets concentrate on the bike fit.

One option that Nick offers is a home visit. If you have a suitable space at home, large garage etc., he can come to you with his laptop, turbo trainer and camcorder. Nick set up my bike on his trainer with various sensors all coupled back to his laptop. I started to pedal and get warm while Nick took some brief details including details of any on going issues or pain. Next he explained what the readouts showed on the laptop and it was obvious I was doing very little pulling up of the pedals so my power stroke was quite “peaky” and not flat as it should ideally be. This was exaggerated when he asked me to unclip one foot and try to pedal with one leg as I was unable to keep up with the pedal on the up stroke.

Next up was some video of my pedal stroke to show how my knees were moving in a less than ideal way. This probably indicated a need for some wedges in the shoe to support my foot. As I use MTB shoes and pedals this is a large in-sole type of wedge although Nick did have some wedges that fit under the cleats. Just makes sure you can shift the cleat bolts! 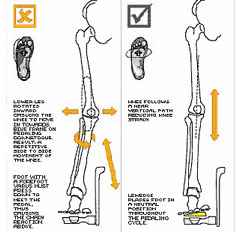 Next up were some on the bike measurements. Two seem critical, one is the knee, the other the saddle/pedal relationship. Both of these are linked and hence when you change one you need to change or at least check the effect on the other. Using a goniometer Nick measured the angle of my knees with each foot in a dead bottom position and then using a plum line the knee over pedal position, ensuring cleats were also in the right place.

With these measurements, Nick then set about some quite minor adjustments to saddle position, both height and fore/aft position, as well as taking a level to the saddle and adjusting that horizontal. Off the bike Nick also checked my leg length to see that both legs were the same length.

With adjustments made it’s a case of checking the angles again, pedalling some more and seeing how it feels, remeasuring and makings small adjustments. Nick again watched my knees and shot some video to show the different in pedal action.

So, how does it feel out on the road? Well it’s still early days for me and it does take me a long time to “melt” into the bike and get comfortable but after what I found to be a gruelling, hilly ride of some 30 miles I got home and felt great. It’s just about getting out there and riding now but I know the bike is set up well and I can concentrate on spinning and keeping my heart rate in the range I want.

Here’s a bit about Nick from Sound Coaching

Nick has been a competitive Triathlete since 1991, starting as a junior at East Grinstead Tri Club, and has since raced at all distances from sprint to Ironman, and mountain bike racing. He is a member of Addiscombe cc, and RG Active triathlon clubs, is a level 3 British Triathlon Coach, Level 3 Personal Trainer, and Sports Therapist, Spinning Instructor and a Master Coach with Training Bible Coaching UK.

He has been a triathlon coach since 2003, quickly rising to become the Head Triathlon Coach at East Grinstead in 2004. Nick has worked as a Regional Development Coach for the South East and currently runs Novice courses for clubs in the south east region. He has worked with GB & Elite athletes, and with physiotherapists & chiropractors involved in injury rehab at Ashtead Hospital, Esher Physiotherapy in core conditioning for personal training and sports massage therapy.

A guide to the buying the best helmet cameras

12 tips for your first MTB race