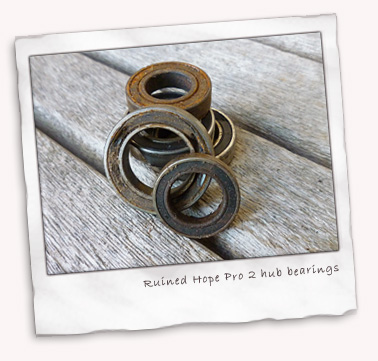 Over the past month I’ve broadened my bike servicing skills to now include replacing the bearings on Hope XC and Pro2 hubs. For anyone who rides hard, or in particular rides the trails through winter, it’s become apparent to me that Hope are some of the best hubs available.

I thought you might like to hear some tips on the process if you run the same hubs and plan to do the work too. Having seen the inside of my hubs I strongly recommend you do so regularly and would say it’s one of the key things to making your bike feel like new again.

The benefits I’ve found from replacing the bearings have been much smoother tracking at the rear and significantly improved steering at the front of my Five, where I’d recently been progressively winding down the fork thinking the steering was rather woolly. After 3000 miles it now feels as good as new with the bearings replaced. 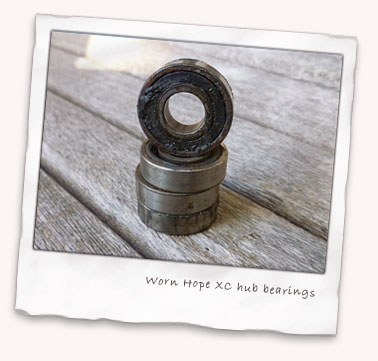 Hope that helps people. It’s not exactly for the novice bike mechanic but the key lesson is that preventative maintenance will make your life significantly easier long term. Based on the evidence I’ve seen, there’s no reason my Hope hubs shouldn’t last me 20 years if they’re properly looked after.

Filed under Tips in October 2010

A guide to the buying the best helmet cameras

12 tips for your first MTB race