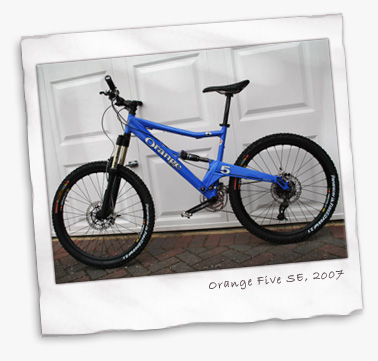 After what seems an eternity waiting, and with a few mishaps along the way, it’s time to announce that I have now taken delivery of my new 2007 Orange Five SE from Cycleworks in Leatherhead. Thank God for that I hear everyone say, perhaps now he’ll stop banging on about it.

Well, perhaps. Certainly I’ve felt like a contestant on a game of Japanese Endurance at times but now the bike is here I have to say I’m very pleased about it.

First impressions are very good, with the frame resplendent in Sub Zero Electric Blue although minus the sparkle lacquer. After the mix up over colour it turned out Orange had none of the lacquer left and to be honest I just wasn’t that fussed enough to wait any longer.

My only criticism on inspecting the frame up close is the quality of the stickers. I love the mod-ish script for the Five logo but it’s a bit disappointing to see the stickers are applied straight over the top of the paint with no lacquer, sparkle or otherwise to seal them in. It’s great to see the subtle creasing to the aluminium of the downtube and swingarm though.

I’m really hoping this bike proves to be a great long term choice. Being single pivot should help reliability, as should the nicely weather protected cable runs and braided brake hoses. It’s running an SRAM drivetrain which again should help maintain consistent performance levels and I’m expecting the Hope/Mavic UST tubeless wheelset to keep me rolling nicely along.

So, it’s a bling bike with plenty of potential for long distance comfort or short burst hooning, whatever my inclination (and skill level) allows. I just hope I’m not expecting too much, but I’ll report back with a fuller review in due course.

Back when I bought my first full suspension bike (the Marin Rift Zone in 2003) I said that it was good enough that it was me that needed to improve and not the bike, then promptly started the slow process of upgrading all the bits so that I had a Trigger’s Broom on my hands. Here, I’m starting at the top with a completely different kind of bike. But I still think it’s me that needs to improve!

For the record, here’s the full set up – basically 2007 Orange Five SE with some key improvements.

Filed under Bikes in June 2007