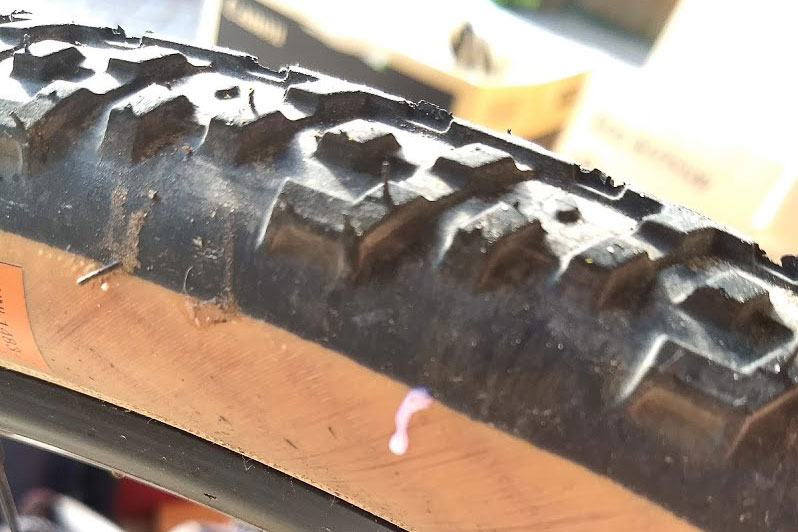 This past few months I’ve found myself with more experience of WTB tyres and rims than I’ve had for the last 10 years and… the jury is out!

WTB have their own philosophy when it comes to rims and tyres, in particular when it comes to supporting tubeless running. They make specific rim beds which have a slight inner lip, intended to hold the bead in place and they produce tyres with a couple of different sidewall options – a Light option and a Tough option. All this is marketed under the TCS moniker which stands for Tubeless Compatible System.

My experience has been solely relating to the Light casing option of tyres with various WTB rims; three different wheelsets and three pairs of tyres in fact. With the Light casing, the sidewalls are so thin that the tyre flops around all over the place when you are trying to mount the tyres. I’ve managed to get one wheel/tyre to mount with a track pump but the rest have needed the Beto air can in support. 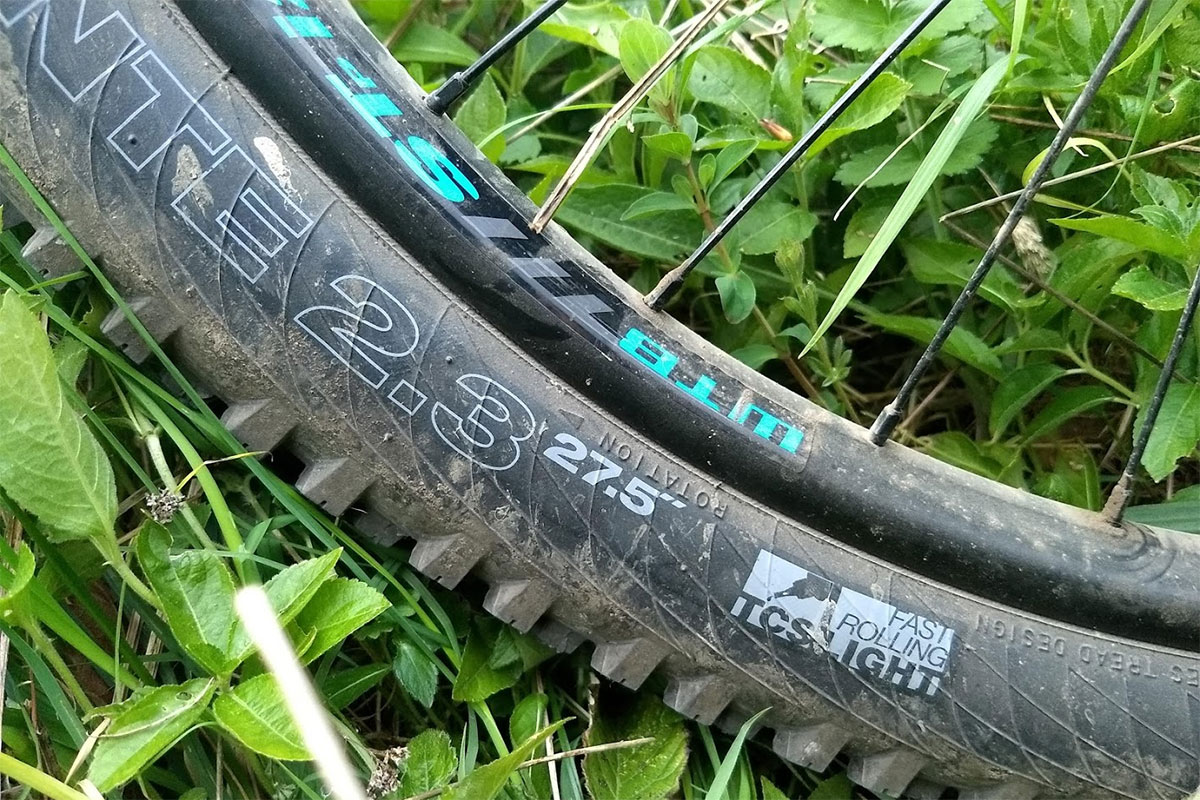 I first came across WTB tyres and rims with my Bird AM Zero build. The donor Pinnacle Iroko came with 25mm rims and WTB Vigilante Light casing tyres, in a Fast Rolling compound. They were a saga all their own but this post is specifically talking about the tubeless aspect of WTB products.

In this respect, they turned out to be troublesome but did eventually seal up after several efforts. I have used Muc Off sealant after reading good things from Guitar Ted and fancying a change from good old fashioned Stans; finding a fur ball in my last set of wheels/tyres that was more like a golf ball convinced me to try something different.

With the pink goo in play, the WTBs proved to need several re-inflations to seal up and leaked small pin pricks of the goo through the sidewalls for an hour or two until they sealed properly. Since then they’ve been good and have not caused me any trouble, but the experience didn’t exactly fill me with confidence. 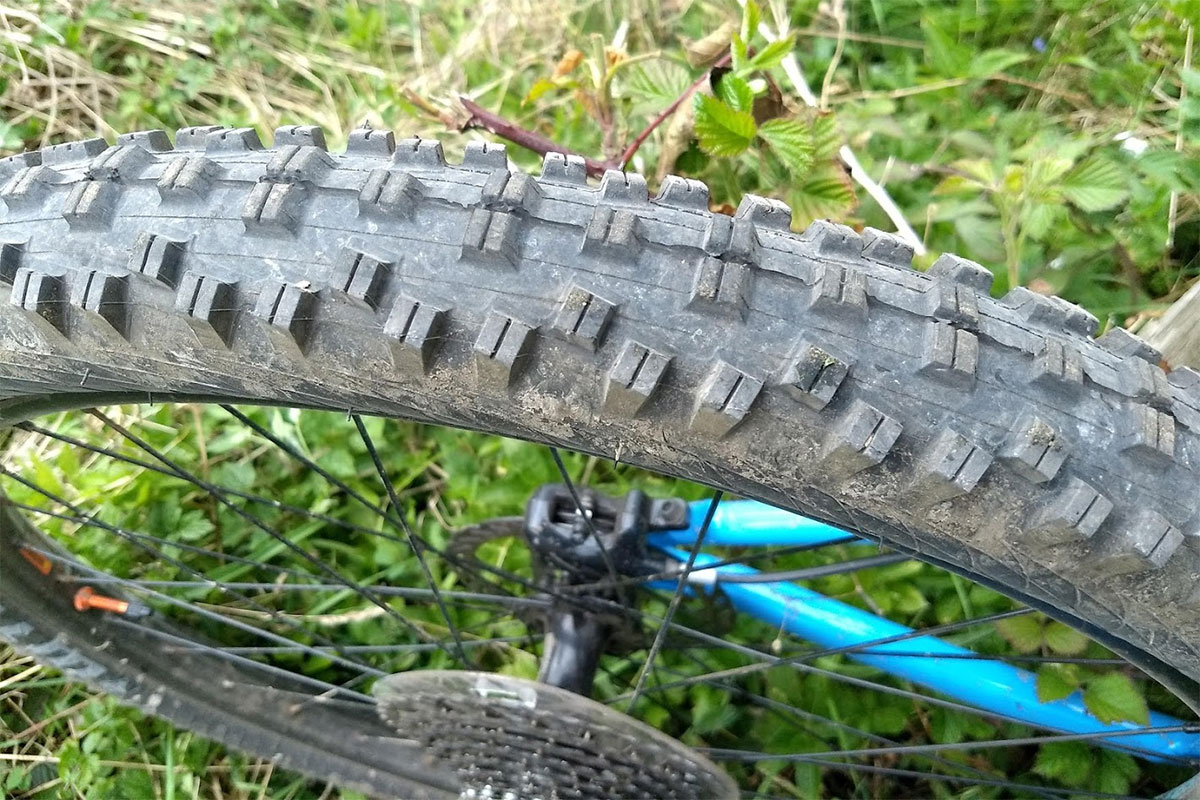 My next encounter was with my new Cannondale Topstone gravel bike which came specced with 700x40c WTB Nano tyres on WTB i25 rims. Like the Vigilantes, the Nanos were very floppy off the rim but actually mounted up quite easily with the Beto booster, snapping nicely into place.

The problem has been keeping them sealed. I’ve put extra Muc Off sealant in to try and overcome the fact the tyres deflate after every ride (I’ve managed 160 miles on them so far). 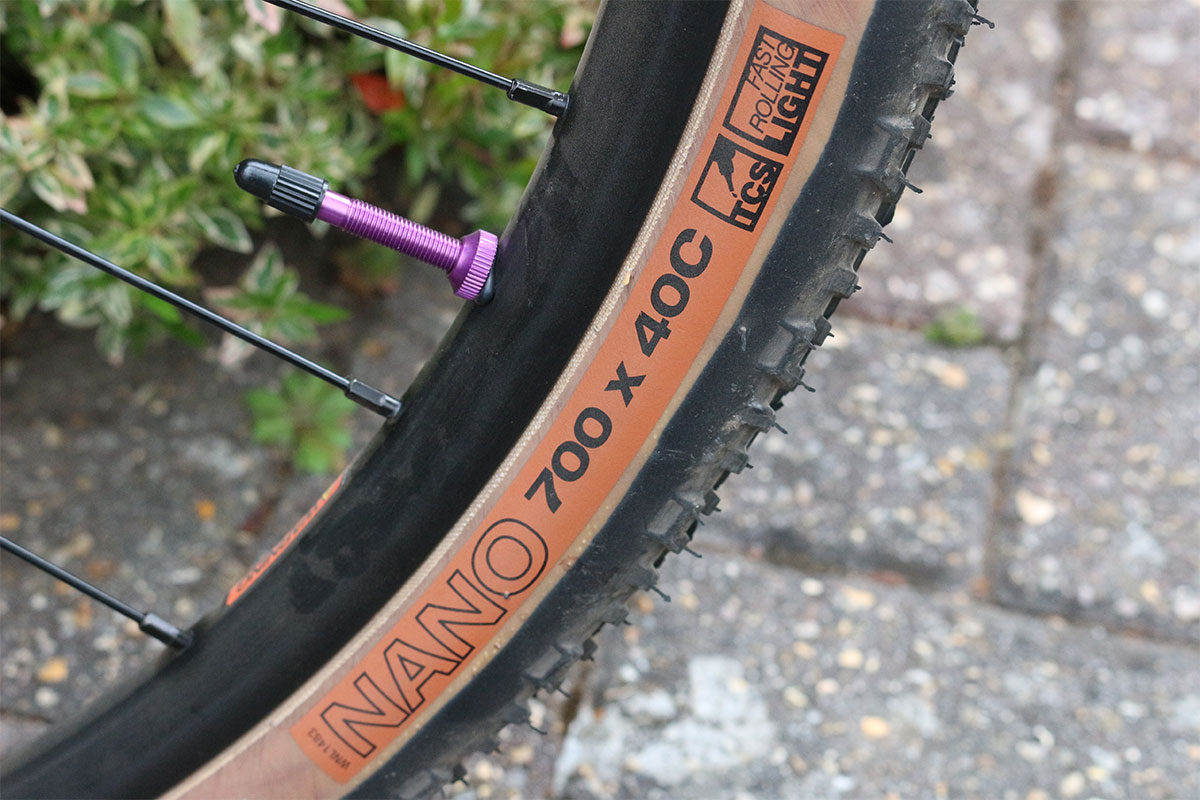 On each occasion I can see small pin pricks of goo coming through the sidewalls but it’s hard to tell if that’s because the sidewalls are getting cut when I take the gravel bike ‘off-road’ (we’re talking smooth-ish trails here and the Nanos don’t look damaged) or if it’s a problem with a weak, porous construction. I say that because I can see the threads through the tan sidewalls!

Either way, I’ve not had anything like this with any tubeless MTB or road tyre in over 10 years, so it’s extremely disappointing. I just don’t expect to get any punctures riding some pretty rough terrain – that’s the point of tubeless in my mind. 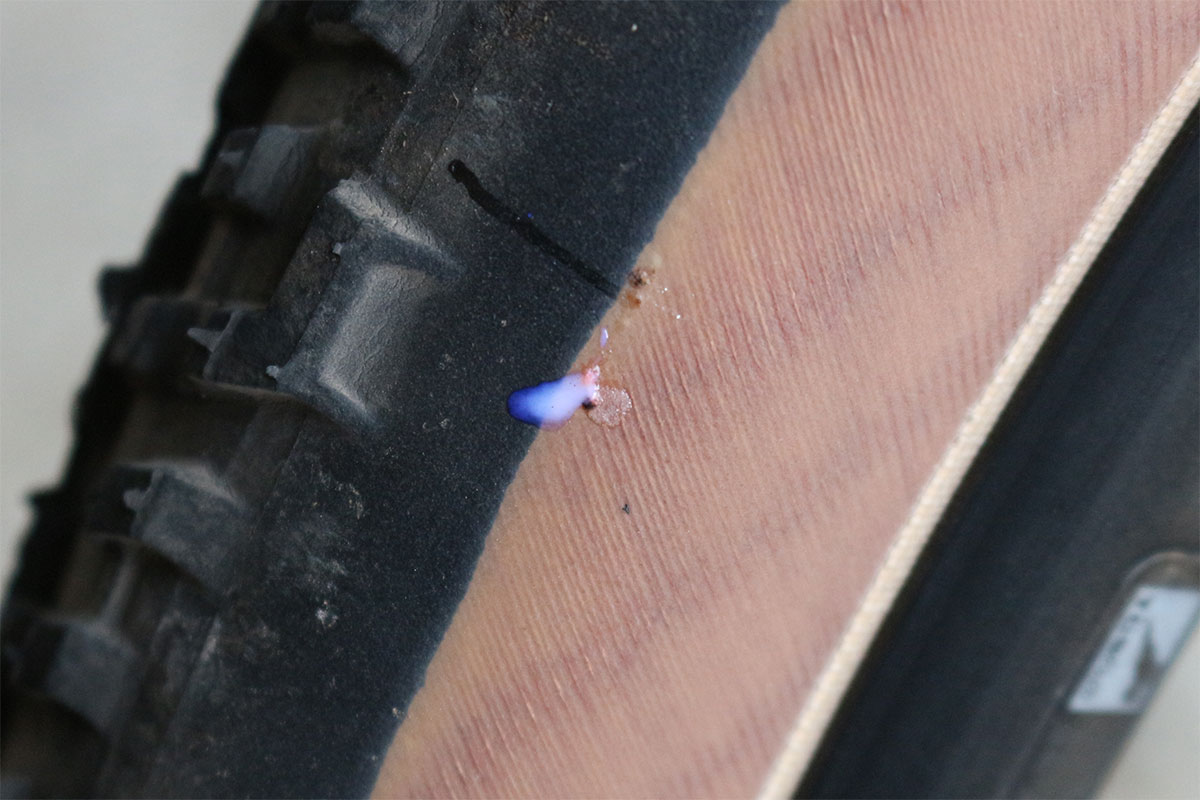 At one point this week, I was re-airing the rear tyre after 17 miles of a mix of tarmac and non-rooty, dusty hardpack trails and could hear air whistling out from somewhere in the in the sidewall. After turning the tyre round the Muc Off sealed it immediately but am I unlucky, or is this just a poor product?

My final experience with WTB tyres and rims was converting my brother-in-laws’ gravel wheelset. It has WTB i19 rims with WTB 700x37c Riddler tyres.

I taped the rims better than I’ve ever achieved before, using two wraps of Hunt’s Black Shield rimtape with brand new tubeless valves. The front tyre went up as expected with the Beto boost, but could I get that tyre to seal?

I put in loads of pink goo and found myself re-airing the tyre 6 times before it finally sealed around the rim and sidewalls. I can tell you, pumping a tyre to 50psi 6 times is annoying and tiring (pardon the pun!).

The rear wheel was impossible to inflate on my own. I could not get it to seat at all – in fact it’s probably the baggiest tyre I’ve ever handled. I needed two extra pairs of hands to pull the sidewall to the rim and someone to dump the air can with 160psi in it to get the beads to seat. Again, pumping the air can to 160psi multiple times quickly gets old too!

Eventually beads seated, lots of goo in and the tyres sealed up after a couple of re-inflations but honestly? I think I’m at the point of saying the WTB TCS system is pretty weak. These tyres too fail to hold air for any sensible time period. I now have no faith in WTB really and am worried about what will happen with a problem on the trail. I won’t go anywhere without a pump and multiple spare tubes at the moment! 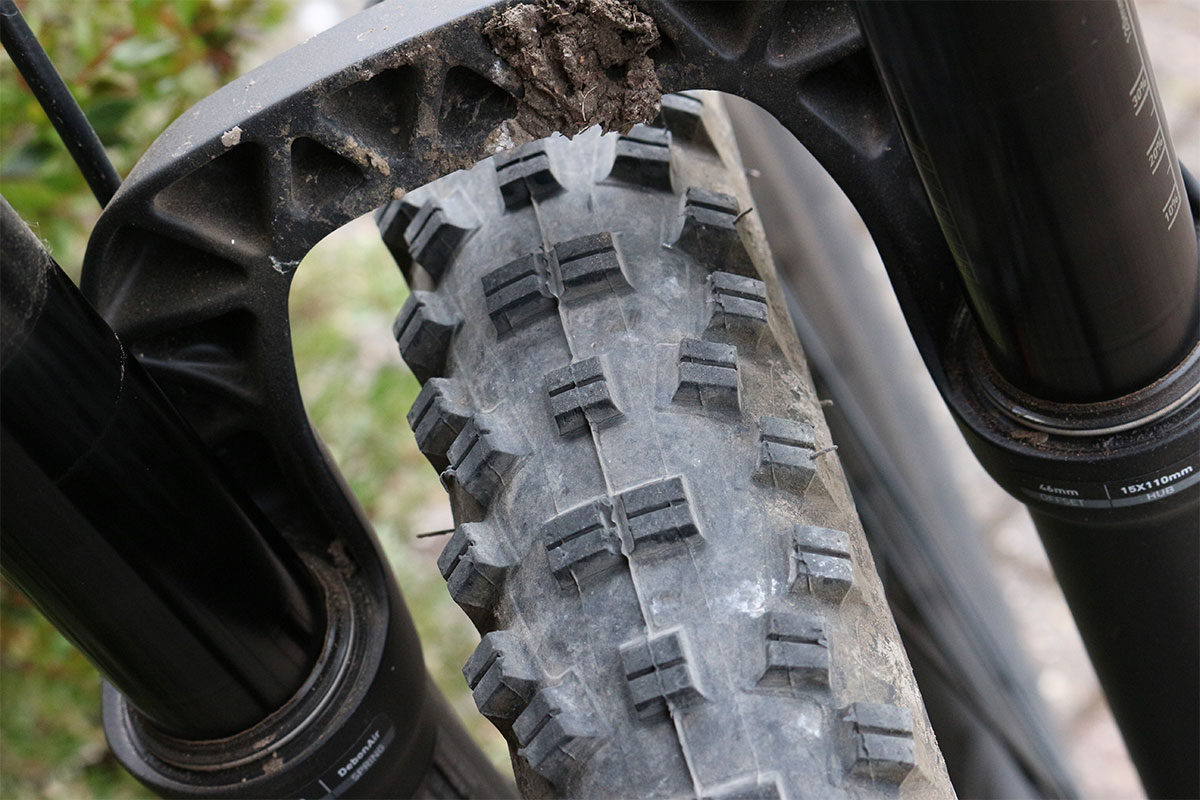 The shame about the whole thing is that the tyres are actually quite good. I really like the grip and profile of the Vigilantes and the Nanos roll well enough for me to average 17mph on a road only flat-ish commute home, with plenty of supple grip too. The Riddlers also have a nice tread that combines grip with traction by the look of things.

I just don’t feel confident about them. The Tough casing alternative is only available on the Vigilantes and they tend to be over 200g heavier in any case.

I am watching these closely but my patience is wearing thin and I suspect I’ll end up with a different brand fairly soon! I can’t recommend WTB tyres at this point.

My advice is to think carefully before you try WTB Light casing tyres especially with some sealant products like Muc-Off; maybe stick to Stans for the sealant but at this point I don’t even know if that would work.