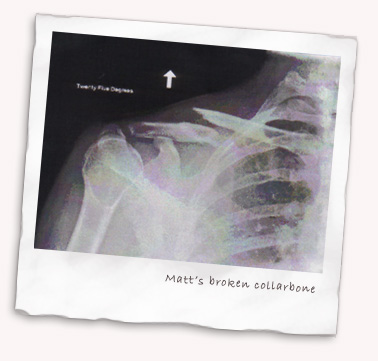 Colin jinxed me. Whenever we do something we’d rather not we look for someone to blame and I’m looking at Colin, especially since he wasn’t there yesterday and so might think he’s got nothing to do with it. But really! Fancy suggesting I rarely crashed!

Actually, this was a big one and despite a few mitigating circumstances it’s mea culpa. Running down a fast track across Ranmore Woods with the steep drop on my right I hit an off camber section with greasy roots and flints that pitched me toward the edge of the trail. Unfortunately for me this was also just where a stout tree was leaning out into the path and I hit it hard, at speed, with my shoulder.

As Martin Brundle might say, after that I was heading straight for the scene of the accident. This turned out to be some distance off the trail which I reached via a complete somersault over the bars and a number of rolls and tumbles. I knew I’d hurt myself immediately, in fact the damage was done by the tree well before I fell off my bike. It hurt, a lot. So I just figured, since I’d also landed on my head, that I’d just stay there.

The guys were great (I can’t thank them enough) and we got the emergency services involved. There was concern that I might have hurt my neck and despite me feeling pretty confidant I hadn’t, I was happy not to take any chances. There was talk of using the Air Ambulance and after that was dismissed it was hoped to get the 4×4 ambulance closer to me.

After lying in the bushes for about an hour, and with by then an assortment of paramedics and ambulance staff on hand the decision was taken to try and sit me up since there was a real difficulty in getting me up onto the path. That hurt too, but once up I was able to walk out of the woods without too much assistance, I think that was about a ten or fifteen minute walk. And that also hurt.

Helen was there to greet me by the ambulance and then it was off to East Surrey, an uneventful trip save for the fact the ambulance staff hadn’t clipped my trolley to the floor and pulling out of the car park saw me heading towards the back doors at speed! Actually, I thought the trip was going to go on forever because despite the driver clearly taking great care, I felt every bump and pothole in the road.

At East Surrey they gave me some painkillers and X-rayed me to see what the damage was. There was more worry that in addition to the bad break you can see above (and more clearly on in the x-ray picture on Flickr) I might have dislocated the shoulder (which had me praying fervently that I hadn’t). Thankfully I hadn’t, and after vomiting violently thanks to the painkillers – I don’t recommend doing that with a broken collarbone – and some strapping up I was free to go.

After ten years riding, that’s the first proper injury any of us have suffered. I’d like to point out that despite it occurring whilst on my bike I didn’t actually injure myself falling off. The damage was done on that first, numbing collision with the tree. A small but ultimately irrelevant observation.

As Lee has already pointed out it shows the value of riding in company, in fact although several walkers stopped offer assistance some riders who passed failed to see me entirely, I was so far off the trail. So I’d like to thank Dave, Jez, Lee and Andy for all their help.

Thanks too to the emergency services and everyone who helped me yesterday. In a way I feel guilty to have taken up their time and I worry that someone lost out because of me. But I really needed them yesterday.

Now, I’m off the bike for a while and really will be someone who talks the (bike) talk without being able to err, ride the ride.

Filed under Lifestyle, Mutterings in July 2008